Tawny is a trio of uilleann pipes (Chris), fiddle (Davydd), bazouki (Martin), and traditional hard shoe dance (Davydd). We have a strong and full traditional sound and a great deal of experience playing for parties, concerts, ceilidhs, festivals, functions and more. We can call your dance or play for a wedding, or entertain a whole festival crowd, so get in touch for some fantastic and up-beat traditional Irish music. We also have a great Sound system and can do acoustic or amped gigs. We play a huge range of tunes and styles ranging from slow airs, songs, waltzes and marches to cracking-paced jigs and reels. Here's what people have been saying about us: "You were fantastic! I don't know how I stopped myself from dancing." "The first time I heard Tawny I was bowled over!" We are called Tawny after the rich tawny colour of our wooden instruments.

Martin has been playing traditional music since the late 1970s when he became involved with the Bangor Folk Club in North Wales.  Since then he has mainly concentrated on playing in sessions and  playing for dancing.  He has performed in a number of Brisbane bands, including Malarky and The JAR, and engaged in a range of different projects involving traditional and world music. Martin’s first instrument is mandolin, but he also plays mandola and tenor banjo.  With Tawny he plays mainly mandola.

Chris is an Archaeologist and university lecturer who has always had a deep love of traditional Irish music. Chris plays uilleann pipes, flute and whistles as well as Scottish smallpipes and reelpipes.

For over 20 years, Davydd has developed a passion for traditional music and dance. He has competed both Nationally and Internationally winning the Australian Irish Dance Championships 4 times and has used his dance experience as a platform for learning  traditional music on the guitar and fiddle.  Davydd also teaches Irish Dance and regularly calls dances for all ages. 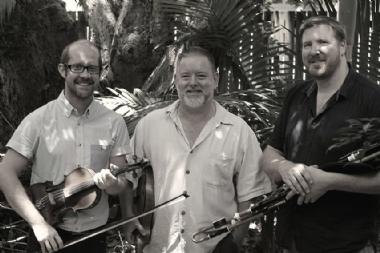