The lineup of Sculptors Mode is impeccable with a range of experience onboard.

James Hale - Lead Guitarist/Lead Vocals…Originally a drummer, James moved to guitar after discovering his passion for writing songs in mid 2001. After a long period of creative hibernation and a few dead end bands, he felt the inspiration to start a new band after playing a handful of solo and duo acoustics gigs around Sydney in 2004. "I wanted my songs and the audience to experience the kind of kinetic energy that only exists with a full force band." Never to settle for second best, James locked guitars with Jason Keir and they began to advertise for band members.

The name Sculptors Mode was created and once Harry Saunders and Allan Chapple were on board, the band was complete. Jason - Rhythm Guitarist /Backing Vocals…Jason started playing guitar at 15, then in 2000 joined a band with some High School friends including James Hale, mainly doing early rock and some cover songs. After the band disbanded due to members commitments to other bands, Jason went traveling overseas for a couple of years. Upon his return James told him he had been writing his own songs and suggested that they form their own band. Together they played duo acoustic sets supporting a local band named 'Skutch' at venues including The Cat and Fiddle and The Sandringham Hotel.

Musical influences include: The Smashing Pumpkins, Jeff Buckley, Ben Folds, Foo Fighters and Jimi Hendrix (of course). Harry Saunders - Drummer…Harry joined the band in February 2005 after migrating to Australia from Scotland the year before. He brings to the band years of experience after playing in a well respected Celtic Rock band from the Highlands which includes recording two albums, appearing live on national television and radio, recording music videos for Gaelic music programs and touring the UK and Europe. After his band folded, Harry migrated to Australia, bought himself a new drum kit and went on the hunt for a new band. Answering an advert posted on a drummers’ website he auditioned for Sculptors Mode and was asked to join the same night. Harry says “I was impressed with the confidence, commitment and energy of Sculptors Mode”, and he has no doubt of the impact the band will have on the Australian music scene and hopefully the world. He likes: Drums, V8’s, Beer, Drums and more Beer.

Al Chapple - Bass Guitar…Al has been playing bass guitar since 1996 and playing guitar since 1989 and has wanted to play in a band since then. His favourite bass players are: Les Claypool of Primus….. And Flea of the R.H.C.P….....Bands he likes are: Alice Cooper….Megadeth…..Pantera….Metallica 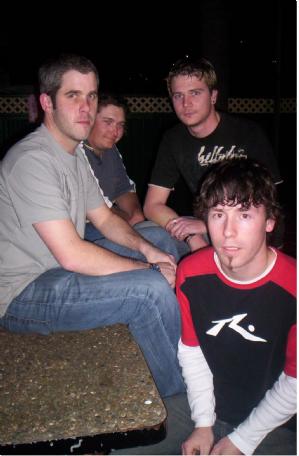