The “Simply TINA!” Tribute Show can be performed as follows:

"Simply TINA!" Testimonials:
"I personally hired Ofelia Guizzon as Tina Turner for an Australian Corporate Icons' national annual conference on the Gold Coast recently.  Ofelia Guizzon as Tina Turner is a once in a lifetime experience that makes this tribute to Tina Turner the most successful, the most fun, the most energetic, and the most entertaining.  Tina Turner Tribute artist, Ofelia Guizzon as Tina Turner is a world class Tina Turner Tribute show that make her audience experience the true magic of Tina Turner.  Her onstage presence is larger than life. You must see her show to believe it. Ofelia will have you believing you are witnessing firsthand the powerful sound and stunning performance of the Queen of Rock and Roll (including those famous legs). Ofelia makes hits like Nutbush City Limits, Proud Mary, Simply the Best, River Deep Mountain High (amongst others) her own in this power packed show.  I would thoroughly recommend Ofelia Guizzon as Tina Turner to anyone who wants a dynamic performance to create HUGE impact at their next fuction. The 400 delegates at the recent conference were "blown away" to say the least." (Clayton Wood, Manager of Corporate Band Platinum Edge)
"You couldn't get any closer to Tina Turner than that" (Corporate Function, 19th October, 2009)
"Hi Ofelia, just a quick note to thank you so very much for what you did on saturday.. your performance made mum's day and we thank you from the bottom of our hearts for your time and love.. your performance was just awesome.. mum is still telling all her friends how fabulous you are .. lots of love from us all xxx" (Bride, Wedding, 24th October, 2009)

UNLIMITED VIBE consists of Ofelia Guizzon (Vocals), Kim Smith (Dancer) and Kasandra Beckman (Dancer).  The group perform fully costumed, choreographed and highly entertaining variety acts with an aim to excite and energize their audiences with performances of unique quality.  Unlimited Vibe shows are perfect for corporate functions and events as a featured or opening act. The group can cater to themed parties, weddings, private parties, corporate and charity events.
UNLIMITED VIBE can also perform with a live band and provide sound and lighting equipment for their shows.

Ofelia Guizzon is an award winning performing artist and songwriter.  Performing professionally since 1999 Ofelia quickly made her mark on stage as a performer of elegance and sophistication in her vocal delivery, stage presence and exotic appearance.  Ofelia can sing, dance, act and entertain.  Her voice is unique in it's sound... expressive, powerful, a texture of velvet and warmth, soulful.  With a Bachelor of Music majoring in Contemporary/Jazz Voice Ofelia has utilized her skills by also working as a Gaming Composer, Vocal Coach, Session Singer, Film/TV Extra and model.
After launching her self-penned and produced debut album in 2003, Ofelia travelled to New York performing her originals in venues such as Madison Square Garden and New York's Hard Rock Cafe as part of the New York International Music Festival becoming a Festival Award Winner for her songs.  Ofelia was crowned the Variety's "Australian Senior Entertainer of the Millenium" title and has won many prestigious talent quests including Twin Towns Services Club "Tooheys Talent Quest 2000", where Ofelia became the first grand final winner who performed an original and Southport's "Search for a Star" competition in 2001.
Ofelia works as a front singer for corporate, club, lounge and dance bands in Brisbane and on the Gold Coast.  Ofelia is a front vocalist for the Gold Coast Corporate Band, Platinum Edge, and is a regular cast member for D&G Entertainment's Popera Classics Collection shows.

"Thanks again Ofelia for a remakably fantastic job last night!... The audience went ga ga! Hot! Hot! Hot! You make us proud of how you delivered like a true pro can!" (Daniel Mallari, D&G Entertainment, 2009)

"Just a little note to tell you how very much we enjoyed your performance in the concert last night... Your grace and charm shine through when you're on stage and we couldn't take our eyes off you!!" (Elizabeth Milward, 2009)

"We were delighted with Ofelia, she was absolutely perfect and made the day... I received many accolades for the event and I think it was because it also ended so fantastically." (Disability Services QLD 2004) 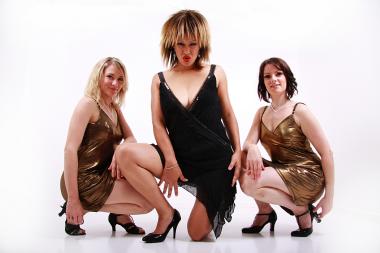