Described by newspaper critics as “An incredible singing talent” and “A master comedian and a fine tenor”, Bernard Hull is a highly experienced performer with an exceptional tenor voice and a wide ranging repertoire that spans popular ballads, music theatre and opera. In demand in both commercial music theatre and opera, his theatrical career spans more than 20 years. His credits include roughly 2,000 performances in the Lloyd Webber musical “The Phantom of the Opera” over a total of more than 5 years, in ten different roles, nine cities and five countries. He has also toured Australia and New Zealand in Lloyd Webber’s “Cats” performing the roles of Gus the Theatre Cat, Bustopher Jones and Growl Tiger.

Bernard also writes and arranges his own material and plays guitar and electric bass, as well as dabbling on keyboard and drum kit. His instrumental skills are all put to good use in his well equipped home recording studio where he prepares his backing tracks for use in his solo concerts and albums. He also produces recordings for other artists (acting as session musician, recording engineer and producer). So far, he has produced six albums of his own music on CD: “Theatrix – on the stage” is an album of songs from (or inspired by) his theatrical career, including tracks like Anthem, from "Chess" Music of the Night from "The Phantom of the Opera" Bring Him Home from "Les Misérables”, Maria from “West Side Story” “Jesus-Messiah the musical” is a double album of Bernard’s all original rock musical. “Christmas Joy” is comprised of six traditional carols together with four of Bernard’s original Christmas songs all with Bernard’s unique soaring vocals and interesting musical arrangements. "Abba, Father" is Bernard's most recent recording of all original contemporary Christian music. “The Lord’s House” is Bernard’s second album of mostly original gospel songs. “Risen” – Bernard’s debut album of all original gospel songs. Bernard has also appeared several times on television and in a number of feature films, including the roles of Constable Fairweather in the feature film “Black and White” and as a funeral director in “Look Both Ways” 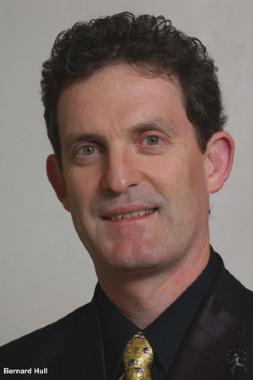