La Mauvaise Reputation formed in Melbourne in early 2009, with the aim of recreating the beautiful French music of the 1920s 30s and 40s. Their repertoire features the songs of the greats of that period: Trenet, Aznavour, Brel, Brassens, Piaf, Ulmer, and more modern additions such as Serge Gainsbourg and the contemporary Chanson group "Les Ogres de Barback". They perform in the Jazz Manouche style made famous by Parisian gypsy guitarist Django Reinhardt. The music is joyous and infectious, the rhythms will make everyone in the room feel like dancing, and the melodies are plucked out of the heart of old Europe. The repertoire is performed in French, staying true to the tunes as they were originally conceived.

La Mauvaise Reputation has a commitment to acoustic music, made possible by the special design of gypsy guitars, which only require amplification in large settings. Thus the band requires minimal setup, has next to no venue requirements, and blends naturally into the space in which it plays - never too loud or too soft.

The members of La Mauvaise Reputation are skilled professionals, with many years of performance experience behind them. Between them they have played all the major jazz clubs, bars, and function venues around Melbourne, as well as interstate and internationally, from regional Australia to the streets of Paris.

Paul Gillett, singer and rhythm guitarist for “La Mauvaise Reputation first heard the music of Django Reinhardt on the streets as a child, and has been fascinated ever since. As his alter ego Floyd Thursby, he has toured Australia performing his original music, and as composer and leader of film scoring project The AngFang Quartet. Paul has done extensive research into the French music of the early 20th Century, including a study trip to France in 2009 to broaden his language skills and repertoire.

Jon Delaney plays solo guitar for La Mauvaise Reputation. He began his performance career in 1994, and has gone on to perform all over Australia with his own Jon Delaney Trio, and as a sideman with countless other acts. He graduated from the Victorian College of the Arts with a Masters Degree in Improvisation in 2005, and alongside his performance schedule, teaches guitar at a tertiary level. He spent 2008 playing in and around Berlin, and has also performed in Canada.

Enzo Ruberto's impecable double bass playing has long been a presence on the Melbourne jazz scene. Arriving from Italy in the mid 1990s, Enzo graduated from the Victorian College of the Arts in 2000, going on to perform extensively not only locally but internationally as a member of Eddie Perfect’s touring band, and in the band for Shane Warne, The Musical He also maintains a busy performance schedule with several Melbourne-based modern and traditional jazz groups. 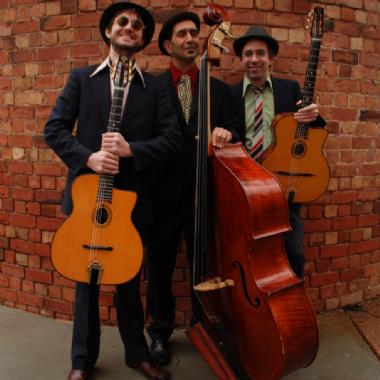