They rock, they swing, and they jump. Coop DeVine are a group of four seasoned professional artists who still think they’re 17. They play a blend of Bluesy Rock’n’Roll with a rockabilly edge. A lot of their material has a swing feel that entices dancers onto the floor from the word go! A team of doctors at the Royal College Of Medical Science, in Melbourne Australia have been working for some time now, to discover what makes Coop Devine so infectious.

One thing is for certain, if you don’t wear out your shoes dancing, you will certainly be tapping your toes all night.

Kevin Spiers, guitar player extraordinaire, brings a wealth of guitar playing experience and influences to Coop DeVine’s unique and gutsy sound.  Kevin has played with some of the leading rockabilly bands in Melbourne including 7 years with the Atomic Hi-ones.

Gazza Long, well regarded roots stixman has played with the majority of blues musicians in Melbourne including, the Jump Devils, Oozin Blues and many more.

Chris Birnie playes  upright and electric bass and has played around the roots blues scene for over 30 years including stints with Alex Burns and Nick Charles, Fiona Boyes and many more. Chris provides a solid heartbeat to Coop DeVine's unique sound

Out front is the hugely talented Jan Cooper, a stylized vocalist with a powerful voice who engages and captivates her audience from the first song! Jan has also been on the blues scene for well over 30 years singing with pretty much every well known blues artist in around. Jans talent not only lies in her superb voice but also in her ability to get the crowd going and keep them entertained all night long.

Coop DeVine have been sharing the duties on rotation at Melbourne’s major Rock’n’Roll dance locations with other bands such as ITCHY FINGERS, The DETONATORS, The FENDER BENDERS and The BLACKHILL RAMBLERS. They have gathered a group of dedicated fans who follow them from one side of Melbourne to the other!

Coop Devine regularly play on the 50's dance circuit around Melbourne, playing to packed venues and providing some of the best dance music in Melbourne.

Our past performances include The Melbourne food & Wine festival, Camperdown cruise weekend, and regular RocknRoll dance clubs and venues accross Melbourne and Victoria.

The songs they play are sourced from the golden era of the 50's and 60's and include songs from Elvis, Ricky Nelson, Brenda Lee, Jerry Lee Lewis, Wanda Jackson, Chuck Berry and many more. 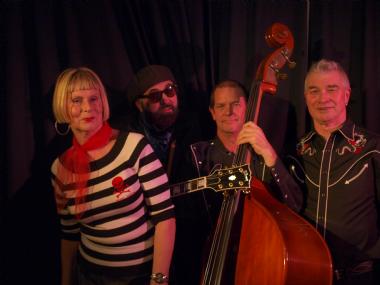