In the ever popular 50’s Rock and Roll Dancing scene in Melbourne, the leading Classic Rock and Roll band over the past two decades has been “Shadoogie’

Collectively, the members of Shadoogie have shared the stage with numerous Local and International acts such as, The Platters, Buddy Holly’s Crickets, Buddy Knox, Johnny Chester, The Premiers, The Allstars, Peter Doyle, Grantley Dee, Johnny Young, Dave Dudley, Frankie Davidson and many more ……

With the retirement and subsequent relocation of well-known Band Leader Lyndon Lewis to Merimbula, he quickly set about identifying local musicians who shared the same passion for 50’s Rock and Roll for the formation of The Sapphire Coast’s very own Shadoogie.

The concept of the band is to fulfil the need for old style Classic 5o’s Rock and Roll music not only for the large proportion of the Far South Coast’s more mature population, but also for anyone interested in music, dancing and nostalgia from that era.

Lead Singer of Shadoogie is renowned Identity Richard King, who has performed his Elvis Presley Tributes all over the country including at the famous “Parks Elvis Festival”

The rest of the band is made up of John Fraser on Drums & vocals, Kevin Breeze on Bass Guitar, Syd Brassington on Rhythm Guitar & vocals and Lyndon on Lead Guitar and vocals.

So if you are interested in songs such as Rock Around The Clock, Blue Suede Shoes, Jailhouse Rock, Apache, FBI, Runaway, or just enjoy the spectacle of Rock ‘n’Roll, Swing dancing, come along and share a night of Nostalgia with Shadoogie. 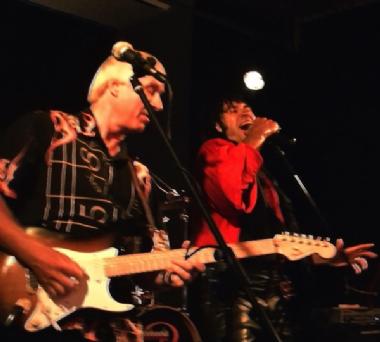