The Upper House is the band with the music, entertainment and energy other bands only dream of.

Need to sing a song to you loved one? Easy.

Changing the lyrics of a song for the company Christmas Party? - Done!

The Upper House puts on a show every time it goes out to play, recreating the energy and excitement of the finest entertainers on the planet, like Frank Sinatra, Sammy Davis Jr, Nina Simone, and Cab Calloway. The Upper House strives to give every member of the audience 10 times the value that they would expect for the money they pay.

Six-piece band The Upper House debuted in February 2006 at Soup Plus, setting the house attendance record. In the short time that it has been in existence, it has already played to acclaim at Dubbo Jazz Festival, Wine Banq, Hernandez Cafe, Statement Lounge and The Wine Banq, along with corporate functions and weddings (including that of Johanna Griggs).

More than a straight swing band, it is as a Las Vegas style Lounge act, in the style of Louis Prima. Their Debut Album, “Live at the Anthouse” is exactly that - a live recording of the band in Anthouse studios, Surry Hills Sydney. Recorded in six hours on December 19, 2006, “Live at The Anthouse” is a collection of Swing and Jazz Country songs, ranging from reworkings of well loved hits such as “Don't Fence Me In”, to new songs recorded for the first time.

Their leader Simon Bartlett said “Live is the best way - What you hear is what you get”. 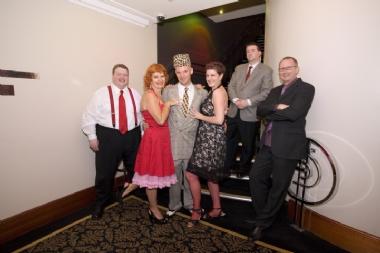