Combining decades of international professional experience in numerous touring bands and vocal groups Dave Robley (Guitar/Vocals) and Lee Droscher (Vocals/Harmonica) bring together a fun show. Combining well-loved classics spanning the decades and well timed comedy splashed in to engage the entire family, it is a light-hearted, well-crafted floorshow for any audience.

Dave's musical beginnings evolved in Northern England when in the early 1970's he left school to pursuit a career as a professional musician eventually joining English band 'GRAFFITI' in the eighties and went on to record two single records and tour Europe. The next step was to form his own band 'BRASS TACKS' who went on to record and play support to some of Britain's top acts. The next 30 years were spent as a bassist and drummer playing alongside various top acts such as 'The Bay City Rollers', 'The Sweet' and 'Paper Lace'. In that time he toured Britain and Europe gaining a reputation as a respected and reliable musician. After moving to Brisbane Dave performed in various cover bands and developed his skill in guitar before branching out as a solo artist in 2012.

Lee Droscher, Melbourne born started his singing career performing in theatre and cabaret. For the last five years Lee has appeared in a male vocal harmony group performing at such venues as Southbank Parklands, Brisbane Convention Centre and Dreamworld, together with the opening of the new Daimaru at Pacific Fair and the official launching ceremony of the Queensland Tilt Train at Roma Street, Brisbane. Lee has an extensive musical background and has been performing since a young age. Such experiences include radio and video. From this experience, Lee has gained a qualified knowledge of what audiences enjoy and this has made him a unrivaled performer and entertainer. 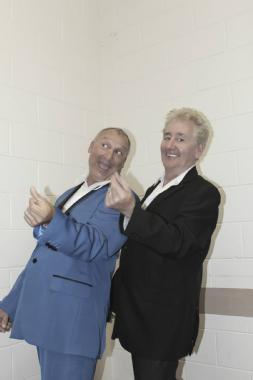