wally and the gators

Joan Brennan   Vocalist
Enjoy the versatile style of Joan Brennan.
Joan has worked over the years with bands, duos and as a sol artist in the clubs in Sydney and Country New South Wales.
She is also a specialist Wedding Ceremony Vocalist.

With a repertoire covering Rock, Country, Modern and Blues, her many years of experience as a singer with bands, duos and as a Singer/Compere have resulted in a professional performer who will be appreciated by those who expect to be entertained by polished artists.

Stuart Leischman Bass and Vocals
Stuart started his musical journey 40 years ago in New Zealand, playing a variety of musical styles, he has played Rock and Roll, Country Blue and Vocals.. He has also backed many artists including recording artist Patsy Rigger. He, together with Andrew on the Drums, are now a tight Rhythm section in the Band
Wally Watkins   Lead Guitar and Vocals
Wally has played in many bands from Melbourne to Brisbane. He has been entertaining people for 40 years, he has played Rock and Roll, Blues, Covers and Original music. After forming the Local band "The Fire Birds" that lasted for 2 years. He was also performing with Pe 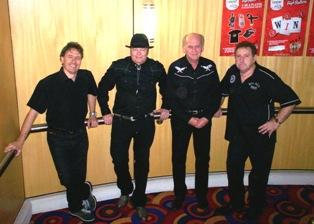