One word to describe acoustic duo Deuawd (A Welsh word meaning Duo), Rachael and Anthony, is “Eclectic”. They provide a unique styling of covers songs from a range of genres from the 50’s to current songs. Songs range from diverse bands such as Massive Attack, Radiohead, Norah Jones and Tracy Chapman to classics from The Supremes, Split Enz, Carole King, The Beatles, The Rolling Stones and many more.

Being quite versatile, Rachael and Anthony, are able to learn songs for that special birthday, wedding or corporate function. They play songs that create a mellow environment for people to relax, drink and sing- a- long to.

Rachael has been quoted as being “not merely a covers imitator. She brings her own unique, soulful interpretation to every song, and it is always delivered from the heart. Her warm, melodic, airborne voice is effortless on the ear” (Alicia Egan – Alannah and Alicia Egan Band) Rachael also spices up the tunes performed with her percussion skills.

Anthony is a multi-instrumentalist who has played around for over fifteen years, playing bass guitar in a several jazz, rock, funk and cover bands. He also teaches guitar and bass guitar.

Deuawd have performed around at various venues including Stones of The Yarra Valley, Hardimans Hotel and Tonik Bar in Kensington, Spleen Bar in the CBD and many more. They've also performed at various private functions and events.

An acoustic duo are the perfect musical entertainment choice where people want live music but don’t want to be overwhelmed with the volume of a full live band. Also an acoustic duo is more affordable option than large band for your event.

Get Back - The Beatles
Give Me One Reason – Tracy Chapman

One Flight Down - Norah Jones

Deuawd have played for many private and public events throughout Melbourne including the following venues: 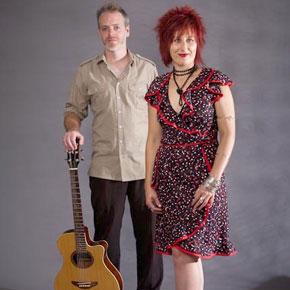