It was the hurricane season, in Blackwater 1994 when Owen Van Larkins, a ten year old Australian discovering his gift for music, began what was to be a journey of musical exploration and discovery. Owen’s father, an artist and musician, introduced his son to the guitar, which was to become Owen’s instrument of choice and access to share his music with friends, family and soon after, a world-wide audience of music connoisseurs.

Owen’s qualifications from Western Australia and Queensland include a Certificate III in Contemporary Music, for which he won an award for contribution to the student group, Certificate IV in Music Performance and Diploma’s in both Music Performance and Music Technology. Owen was featured on Channel 7’s six o’clock news for his effort in this area, he also continues to work closely with the music department co-ordinators, performing and holding workshops to encourage young musicians to begin a career in music.

Van Larkins plays a modern fusion of traditional styles with a “one man band” approach incorporating bass, rhythm, melody and harmony. Owen’s music has transitioned from Metallica to finger-style acoustic guitar, playing transpositions of 400-year-old songs written originally for the harp. He is now signed as a solo artist with CandyRat Records and completed his first album in May this year. During this time he has toured to New Zealand twice where he recorded his first album with internationally-renowned guitarist Andrew White and played at the Acoustic Masters Series held in Hamilton where he opened three of the shows and also played with Nigel Gavin.

Owen has also toured America and Canada several times and in July 2011 performed at the prestigious Canadian Guitar Festival in Kingston, Ontario.

“To listen to Owen Van Larkins play guitar is to watch some magic of nature that both amazes and calms the spirit. The listener is drawn into his world, a world where his seductive melodies tell tales of adventure and of love and weave a path through a land that is new and exciting yet somehow familiar. ” - Andrew White – Recording Artist

"Owen Van Larkins is one of the best young up-and-coming songwriters I know. His music immediately draws you in and won't let you go until the end of each song" - Rob Poland - Candyrat Records

“Owen represents what this degree is all about; it provides the perfect learning opportunity for creative and talented people to express and explore their musical ambitions,” Charlie Macneil – Music Teacher, Creative Music Technologies - 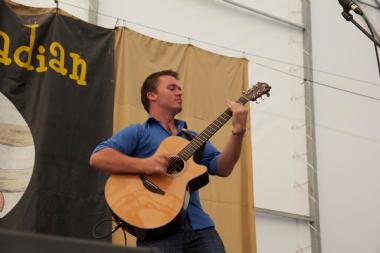