Born out of the surf of Bells Beach, Surfusion is a band of surfer-musicians who are as passionate about their music as their surfing. Having formed in 2002, the band have played a slew of gigs along the Surf Coast of Victoria, building up a reputation as an awesome live band, whether in a small cafe setting or in front of a festival crowd.

Surfusion comprise Red C. Whyte on songwriting, guitar and vocals (see redwhyte.com), Del Reis on 6 stringed bass and Joe Ham on drums and percussion. All members pride themselves on their musical ability- and their ability to provide a wicked live set. s Surfusion is backed by many years of playing experience within the thirty-something band members...not old but experienced.

Members have played in influential bands such as The Red Whyte trio, Inked Factor, Compost and The Rio de Janiero All Stars. They have toured several times to Byron Bay, twice to King Island and have played the Rip Curl Pro Bells Beach and Queenscliffe Music Festivals.

The band plays what they call 'Surf Music'...but dont go back to the Beach Boys for inspiration...Surf Music has been re-defined to include a heady mix of psychedelic jazz funk heavily influenced by greats of the 60's and 70's. The music has a strong theme of connection to nature through the soul-soothing art of surfing. All songs are originals written by Red and arranged by the band.

Live gigs feature a lot of improvisation and 'tuning' of the music towards the vibe of the crowd. Book us and you'll find out how good this band can be! 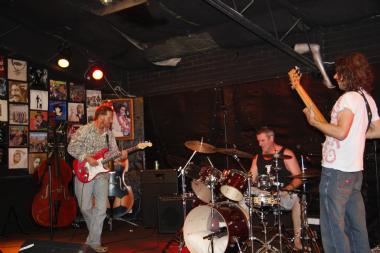