Request a Quote
The Cairo Club Orchestra is an American-type dance band based in Melbourne, Australia, comprising ten swell guys dedicated to the faithful recreation of the hot sounds of the 1920's, 30's and 40's.
These committed loony tunes have sifted through archives, braved dusty, spider-filled garages and swapped scores with venerable eccentrics in Australia and overseas to locate the best in early jazz, blues, swing, talkie hits and novelty music. And when they can't physically locate the music, well some of the guys just go ahead and transcribe scores from original recordings.
They all play on period instruments, and if you asked them why they do it, they'd tell you they do it because it's fun. But if you've seen the orchestra in action - you wouldn't need to ask.
The Cairo Club Orchestra recreates the fabulous sounds of the legendary Between the Wars swing and dance orchestras. Our Repertoire includes works by:
So enter a world where radio is the latest in communications technology and crooners rule the airwaves; where patent medicines cure everything and Kensitas cigarettes are "a Recipe for Sunshine"; where anything wonderful is "the cat's meow" and using Rinso "saves a scuttle of coal every washday"; where flappers dare to role down their stockings and kick up their heels and a whole population dances their troubles away to the irresistible sounds of the fabulous Cairo Club Orchestra.
The Cairo Club Orchestra consists of 4 brass, 3 reeds, drums, percussion, bass and banjo/guitar.
The Orhcestra can expand to accomodate a feature vocalist, piano and/or violin.
"Outside of North America, Melbourne is the biggest swing city in the world."
-The Age 2003
The stylish 10-12 piece Cairo Club Orchestra was founded in 1983 by Trumpeter & Musical Archaeologist, Peter Milley, who still leads the band today.
A member of the American Society of 20's Orchestra, the Cairo Club plays all the Hot Vintage Tunes of the 20's, as well as Big Band & Swing Music through the 30's and 40's. The Band has an extensive repertoire built over 17 years, with the Music appealing to all age groups including the 'retro' young.
A unique outfit in Australia, Cairo Club plays from the original musical arrangements and uses period microphones and Art deco music stands, reminiscent of the age. The musicianship of all players is top-class. The Band has performed in most prominent & prestige venues, as well as appearing in the media, and touring interstate.
Cairo Club Orchestra is classy, entertaining & enjoyable, and fabulous to dance to. For a special night to remember, with superb music tailored to your requirements, you cannot go past Cairo Club Orchestra.
Press article
Mr Milley plays trumpet and is band leader for Cairo Club Orchestra. a 10-picce band that specialises in music from the'20s and '30s.
As a collector of this era's music. Mr Milley is among a small group. which he says includes American media magnate Ted Turner and Playbox founder Hugh Hefner.
"It's not a huge high-brow culture." he said
"People don't swap and reassemble this music. Being popular music. it doesn't attract elitist money because it's not opera or ballet.
"There's so much mythology about this era (the 1920s). It's quite misunderstood.
"You've got the Glenn Miller big band thing from the mid '30s. It's a different style to the 1920s bands, which were smaller. with around 12 people."
Mr Milley said the Cairo Club Orchestra was o(ten perceived to be a "big band". but the bands of the 1930s had 1 5 to 25 musicians.
In his collection are about 200 pieces of music for dance orchestra. They have been garnered through his membership of the California-based American Society of Twenties Orchestras and associations with characters like the late conductor Carlo Briglia, who was as generous with his whisky as his music, Mr Milley said. "He played fiddle and was a conductor for J.C. Williamsons who did all the big shows and brought out all the opera companies from Italy.
" He would keep pouring the scotch and I'd get sozzled, so I'd ask for lemonade and he'd keep pouring the lemonade and I'd get high on sugar instead."
Mr Milley said his collection included six old leather suitcases of music from 1925 to the 1950s from the estate of a pianist and band leader who worked on a ship.
"There's heaps of stuff from the early '30s which is really hard to get because of the (Great) Depression," Mr Milley said.
Cairo Club Orchestra plays music by Jelly Roll Morton. Fats Waller, Louis Armstrong and some Glenn Miller. 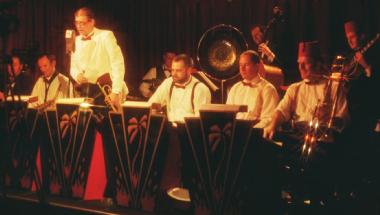