F J Blues started life as a blues band for Scoey's eldest daughter's 21st birthday. She always wanted to play in a blues band and the guys helped Scoey give her what she wished for. The band has gone on from there and survived some line up changes along the way. F J Blues play the blues, roots, originals, rock'n'roll, and an eclectic mix of classic hits.

Their venue experience stretches from a private party in a swept out horse stable to main stage at major music festivals. Having been described as 'Making Ears Smile', 'The band that set the groove.' 'Not only entertaining an audience, engaging them.' and 'The Four with More', F J Blues music is always high quality, and their rapport and engagement with the audience have people coming back to hear them again.

The band has had various iterations over the years, and is once again a four piece which is the combination that the guys are most comfortable with.

So here are the guys that make up F J Blues and a bit about each of them.

John. Given the moniker 'Blind Dog' back in the 70's by Lango, it has stuck through the years. John is the main singer and song writer with over 80% of the F J Blues originals coming from his pen. John plays a Taylor acoustic guitar, and switches to a Robert Cray signature stratocaster when playing electric. He was also the original bass player in F J Blues and has that bass player's 'clock in his head'. By day John is a painter and decorator and is married to Joanne.

Rod Nick named 'Smooth Tones' for his bassing style. Rod has been playing in blues bands for a number of years. He plays a 65 Jazz which is in immaculate condition, and Rod sees that it stays that way. He has recorded on albums before joining F J Blues. Rod had had several career changes in his lifetime but is currently a High School Teacher by day and is married to Beth. Dave Budgmeister or Budgie.

The drummer. Dave has had a checkered career in music.He is a singer songwriter, was 50% of the duo Dave & Dave, playing across NSW in the 70's and 80's, has backed famous artists successfully and also plays drums (very well). During the daylight hours Dave is a photographer specialising in weddings. Dave is married to Michelle.

Ross Known for many years, and on four continents as Detroit Scoey, Ross is older than his 50's strat which makes him the ancient relic of the band. He has been playing the blues in a myriad of places and with a host of people, none of them famous, but lots of them excellent musicians. He has also had a multi faceted career and at one stage even worked for Fender as a guitar mechanic. By day he is a clerk. Ross is married Maree who was also his navigator when he drove works rally cars in the past. 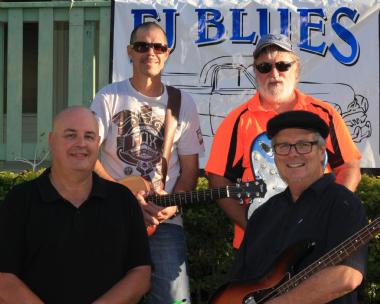