Who Are Synergy Blue?

Synergy Blue is a formation of experienced musicians with a wide range of styles and feels for Blues music. The band was formed in 2006 by Sam Salzone (Smokin Sam) as an outlet for his passion for music, singing and harp playing.

Synergy Blue combine their own unique blend of Blues, Touch R & B, Funk and Soul, with a high energy brand of raw Texas blues, and has performed to enthusiastic audiences of all age groups and musical tastes at a variety of hotels and other music venues, as well as festivals and fundraisers, and have appeared as special guests with other well-known blues musicians.

In January 2007, Synergy Blue recorded their live performance at the Cornish Arms. Their ensuing cd, A Taste Of Synergy, was launched in June 2007.

My musical career began at the age of 16, when I began singing and playing the blues with my first band, 'South City Union'. Other bands that I had played in include: Rag King, Fat Alroy, Clutch Cargo and Sky. My early musical influences included Muddy Waters, Howlin Wolf and early Fleetwood Mac. My harp playing was moulded to Linkin Louisiana Peps Blues Connection. Vocals, well... my own style, I hope. 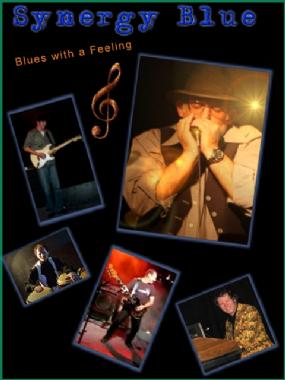