WHAT DOES THE BAND DO?
The Bell Bird Bush Band plays for and teaches Australian Colonial bush dances. We call all dances for both learners and advanced dancers. The band also performs at concerts requiring Australian bush music and Colonial songs.
PERFORMANCES INCLUDE:
Songs
Dances Taught and Called
BACKGROUND
The Bell Bird Bush Band has performed at.
BAND MEMBERS
WilmaBand leader and accomplished pianist who calls dances, plays keyboard and laeerphone in the band at bush dances. Wilma is a qualified piano teacher who lives in Normanhurst NSW. Together with Allen she formed the Bell Bird Bush Band in 1982. Music is the passion of her life and she would not pass a single day without playing a tune whether it be Beethoven, Bach or Bush music.
Allen. Original member of the band formed almost 30 years ago. Allen plays guitar and harmonica He sings Australian Colonial songs and calls bush dances. Allen is a qualified schoolteacher and especially enjoys teaching children the old Australian Colonial dances. He lives in Baulkham Hills NSW and is involved in several folk clubs and bush music societies.
Bob. A professional musician with a wonderful talent for bush tunes. Bob plays violin, mandolin and harmonica.He also plays in Irish groups, old time bands and community orchestras. Bob has played music for many years and has performed at the Opera House and with Rolf Harris. He ranks as one of Sydney's top violinists and bush music performers. The band is indeed fortunate to have Bob in its membership.
Eric.A fine musician who plays in many varieties of bands including bush, Irish, modern and old time. Eric sings, plays violin, mandolin and guitar.He also calls bush dances and is particularly competent with teaching beginners. Eric has played music in both Sydney and the NSW Riverina district. 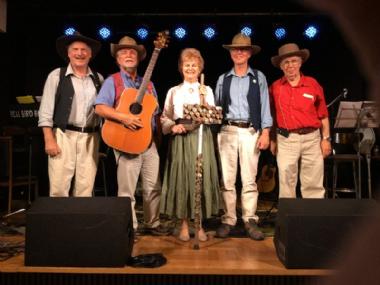