With many strings to her bow, Lilo Blyton has been a prominent violinist around the Australian Folk Music Scene for many years.

As a member of various Celtic & Country  Folk groups and Bush Bands from the 1970s to present, she has performed at major Folk Festivals, Hotels, Functions Centres and Woolsheds.

Lilo has entertained tourists from `The Rocks' to `Old Sydney Town'; sailed Sydney Harbour as a fiddler on `The Bounty' and toured schools for `Musica Viva' throughout Australia.

With her unique style she combines elements of Celtic, Country and Jazz  fiddling and loves accompanying fine singers.

From 1997-2009 she was a prominent member of Irish band Blackwater and recently has played with Simply Bushed at Tamworth Country Music Festival 2010.

You will see her at Sydney's premier Irish Hotel The Mercantile in Sydney's Rocks area every other Sunday afternoon (residency) with Jimmy Moore in Claddagh .

More recently ,Lilo and Greg Dimmock  are the current 'Cat and Fiddle'.

Lilo and Greg have many gigs together under their belts since first playing as minstrels at ' Old Sydney Town ' in the late 1980s..Greg in his own right is a multi -instrumentalist and singer of fine songs from folk to contemporary and also runs bush dances and childrens' pre school shows.

Greg is founding member of Speewah Bush Band and has travelled the world entertaining and wowing crowds,especially with his swagman shows and didgeridoo expertise.

Together Lilo and Greg offer combined instrumental and vocal styles , with fun personalities, costumes and entertainment value, either as roving minstrels or in a stage setting.

Cat and Fiddle may perform as a Duo or Band. 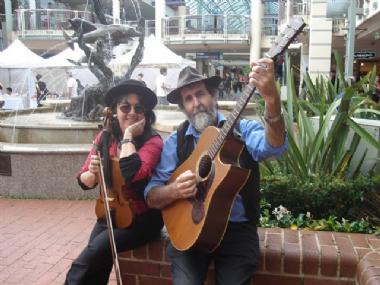