An established family based bush band based in the Southern Highlands - in easy reach of Sydney, Canberra, Goulburn and Wollongong - and offering entertainment for festivals, bush dances, weddings, parties, and fundraisers.

For rollicking bush songs interpreted with Australian pride, and bush dances from colonial to contemporary, expertly taught and called, you can't beat this bush band!

Band leader, Dave Johnson served his apprenticeship with the Bush Music Club. He played with The Rouseabouts, The Reedy River Bushmen, Pinchgut and Southern Cross Bush Band before moving out to the Southern Highlands and establishing the Paddys River Band. He is the driving force behind the world-class annual Bundanoon DanceFest. Since 1982 he has been Musical Director and conductor of the Heritage Ensemble performing for the annual BMC Heritage Ball. At the 2004 National Folk Festival the ensemble played Dave's celebrated Bush Dance book from cover to cover. A feat that kept dancers going for four hours! In 2015 and 2019 they were selected for the NFF Heritage Ball.

Dave plays bush-style fiddle with a rock solid dance tempo, fingerpicks his beloved Cole-Clark guitar, and squeezes delight from his anglo concertinas. On recordings he has been known to add banjo, banjo mandolin, bass and viola when needed.

Anne Pidcock backs up the band sound with a solid underpinning bass and rhythm line on electric piano. Her playing appears on band recordings, and some classic ABC and 2MBSFM recordings of Backblocks, a group established to play old bush dance tunes with traditional instruments.

Initially the band included Anne and Dave's three sons but as work and life and family commitments have led them astray, other musicians have been recruited. Eldest son James still plays on occasions. His powerful piano accordion and crowd-stopping recorder playing are a welcome addition to the sound.

Fiddler Tony Stuart and his flautist wife Jude often join the line up since their move from the wilds of the Central West to Goulburn. Tony has taught at the Goulburn Conservatorium and Jude recently retired as principal at a Goulburn high school. As well as fiddle Tony adds banjo, guitar, mandolin and accordion. Jude also adds dance calling and percussion to the band.

Maria Dunn is a neighbouring fiddler and violin teacher. In a recent production of a musical about a local holdup by the Ben Hall gang written by Dave, Maria directed the sell-out show brilliantly. Maria has the gift of being able to improvise a harmony line on the fly, adding a depth to the band sound.

Bertie McMahon recently added to the lineup with his impeccable double bass playing. He is also a guitarist and singer and is often found at folk festivals contributing to many genres of music.

Adrian Wilson adds a strong piano rhythm and melody to the lineup when needed. Anne was for some time somewhat incapacitated with a broken arm, and Adrian's ability to follow the dots was much valued.

Jess Randall is the fabulous fiddle legend who leads the Crooked Fiddle Band. I have the privilege of having her play with Paddys River Band on many occasions over the last 20 years and she is a dear friend. 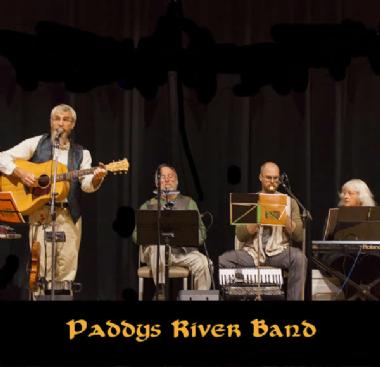