“STONE THE CROWS BUSH BAND” is more than just a bush band, it is a unique blend of traditional Australian Folk and Country entertainment aimed at preserving and enhancing our Australian music heritage with a touch of Aussie humor, poems and yarns. We also play old time dance music or even provide a taste of 50 and 60s rock and roll.

The band has been performing as a group since 1988 providing entertainment and dance music at venues ranging from hotels and clubs to school and church bush dances. The band’s particular emphasis is on traditional Australian songs and tunes originating from Australia’s earlier history.

Many of our traditional tunes such as “Botany Bay” and “Road to Gundagai” are very entertaining when performed with four part harmony as well as traditional instruments such as fiddle, banjo, mandolin and whistle. As part of our act we always include those great old sing-along tunes such as “Waltzing Matilda”, “Click Goes the Shears”, “Home among The Gum Trees” to name a few.

Stone the Crows will also call your favorite bush dances including the Heel and Toe Polka, the Drongo, Strip the Willow, the Stockyards and many others. We always include some children’s specialties such as the Hokie-Pokie and Chicken Dance.

The members of Stone the Crows Bush Band include experienced musicians with a wide background of musical accomplishments and tastes. They include: 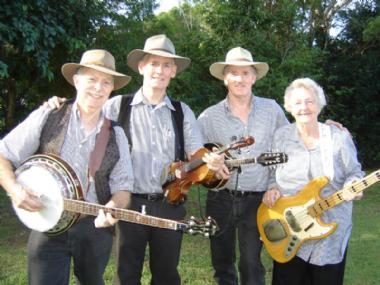