The distinct sounds of the steel pan, comas and percussions blend beautifully together with the vocals of Stanley, Mark & Peter to make up HOT BANANA.

The group leader - Stanley Steer is a Jamaican-born singer/ keyboard/ guitarist who has had considerable experience in the music industry. At the age of 21 he joined his first band which toured around the north coast of Jamaica. There followed a series of performance; in and around his homeland, which also led him to North America.

Stanley's travels eventually brought him to Sydney, Australia where he has been based since 1993. Since then he has undertaken many musical projects. His experience with music has also allowed him the opportunity to play overseas, touring with HOT BANANA in such distant places as The Middle East, Japan, Singapore, Fiji, Mauritius and various cruises for the Fairstar.

Television has also been part of Stanley's experience - he has appeared in the SBS program "Seven Deadly Sins" in a supporting role as well as being a finalist on "New faces". His latest venture was an appearance in the movie "Dark City"  released late 1997.

Other members of the band, Peter Richmond from the Island of Trinidad  & Tobago has been playing the steel pan for 10 years. Mark Muldra singer/guitarist has been involved in many varying projects and has now joined HOT BANANA.

Who is HOT BANANA

A Jamaican born singer/guitarist/keyboard player who has had years of experience in the music industry.  At age 9 he joined his local church choir, his love for singing continued into his early teens at which time he started working around the resorts & hotels. Stanley's first band toured around the North Coast of Jamaica, where followed a series of performances which led him to North America.

Stanley has performed in many countries including the Middle East, Japan, Papua New Guinea and the South Pacific.  He has been based in Sydney since 1983, and has undertaken many musical projects.  He has also been involved in television work, appearing on the SBS program "Seven Deadly Sins", as well as appearing in the movie "Dark City".

Hailing from the tropical paradise of Far North Queensland, Nicola Sebastianelli has been treading the boards since a very early age.

Having collaborated with many different Australian and international artists on various projects, productions, concerts, shows, studio recordings and film making.

Her repertoire is a theatric fantasia, entertaining the dramatic romance and charm of Traditional Latin songs of love and playful humour of calypso riddims & rhymes of indigenous jungle fever.

Hailing from the Island of Trinidad & Tobago, Peter Richmond came to Sydney at an early age.

Peter has been playing the Steel Pan for over ten years, his talents have taken him to overseas venues - Peter has just returned from a 2 month trip to Japan.

Peter also lends himself to backing vocals in Hot Banana.

Below is a listing of some of our popular hits! In addition to this listing we are sure to have your favourite songs that will make your event special! 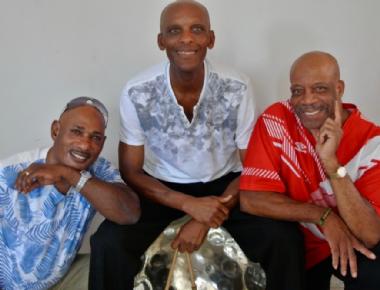