Alison provides soothing harp music creating a peaceful atmosphere, perfect for weddings and intimate functions. Specialising in Celtic & Australian music her repertoire expands out to include many other styles including Celtic covers of popular songs.

She can provide anything from solo harp through to a 6 piece band playing Irish & Australian music (traditional & modern) to get you dancing & singing along. Alison has performed both nationally and internationally for weddings, parties, festivals, concerts, community events, Irish sessions, amusement parks, cruise ships, private and corporate functions, tourists, fundraisers, bush dances and Ceili nights. She played in Sydney Town Hall at a reception for the President of Ireland, Mary McAleese.

Alison also plays:- Irish whistle Flute Piano Accordion Bodhran Keyboards Bouzouki Vocals “Heard you at the Rocks doing some Irish tunes. Your combination of whistle & guitar is fantastic. I have not heard the whistle played like this before - so fast & rhythmic, cheerful & hypnotic.” “terrific-good live entertainment-toe tapping stuff!!” “..thank you and your band for your beautiful & lively music on our wedding day. We still have some of the music, singing & dancing on our video so we will enjoy it for years to come.”

Originally from Belfast, Alison is a very accomplished musician. She is a classically trained flautist & pianist and has performed in Ireland, Europe & the South Pacific, & in folk clubs and festivals around Australia.  Alison also teaches whistle, and bodhran and has run teaching workshops at several festivals. She has also been involved in organising several festivals including the "St Albans Folk Festival", and the "Celtic Music Festival at the Mean Fiddler," and runs Boyd's Irish Music Agency.

Venues where I / we have played include:-

Festivals / Events where I have taught / performed

This is by no means a full list but it will give you a good idea of what I / we can do.

Many modern songs can be adapted ….. I have had brides walk down the aisle to Eric Clapton, & Guns’n roses played on the harp.

Talk to me and we’ll see what is possible. 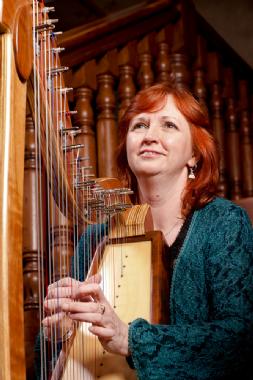