The members of EAT YA GREENS list impressive credentials including many years of performance experience each. The band consists of 4 very talented musicians, who together with a serious performing commitment, bring to their performances an energy which can only be described as pure chemistry. Peter Stanley, Dave Ashby and Mark Cray lead the guitar and vocal dynamics of the band providing powerful harmonies and a blend of guitar mandolin and bass. Robyn Mitchell  forms the wind instrument section of the band . Robyn is a highly skilled musician with an enviable performance versatility using instruments such as the Irish Whistle, the Recorder, the Flute,  the Bodhran (Traditional Irish drum) and Australia's own Largerphone.

Peter Stanley played as a folk musician for many years before he joined the band. His talents include songwriting and he has written several of the songs performed by the band.  He, along with Mark and Dave, has the gift of being able to create powerful harmonies which gives the band a unique energy often missing in live performance. Peter plays Acoustic guitar

Mark Cray has been bumming around with the bass guitar for so long he can't remember, and now he plays bass with the Eat Ya Greens. He began his musical enthusiasm learning piano, then acoustic guitar at an early age. After playing in rock bands for a number of years, he gradually turned his interests to more traditional Australian music, and thus, got together with friends to form the Gumnut Bush Band, who eventually went on to become Paddy's Wombat Band.  Mark has also played bass guitar for many years with local school drama productions.

Robyn Mitchell have an extensive history as a musician. She is a professional music teacher and has a diverse musical background. Robyn plays the Irish whistle, Recorder, Flute plus a range of percussion instruments, namely the Irish drum (the Bhodran) and the classic Aussie Lagerphone

Dave Ashby has joined forces with these fine players, ringing a wealth of practical experience stretching back too many years for Dave to think about. A classic Guitarist, Dave has played in a range of bands with a range of styles (and is equally at home in each) and brings this experience to Eat Ya Greens. Dave plays guitar, mandolin and sometimes banjo.   Dave has an excellent smooth vocal style

EAT YA GREENS is a fusion of Irish and Aussie musical influences.  . The  band play Irish music, together with a mix of Aussie bush, country and “fun time” music (sprinkled with a number of our original songs) With the addition of a fiddle player, we can also operate as a 5 piece with endless possibilities, including Traditional and Aussie Bush Dancing

Our Aussie Songs include:.... 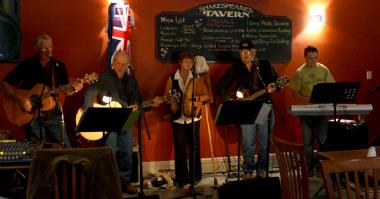