Originating from Perth, Western Australia and formed in late 2006 after numerous line-up changes, Shanks Pony has secured several residencies throughout well-known venues in Perth, Fremantle and the south-west. They have also performed at high profile gigs such as the Nannup music festival and the Sunset @ Subi concerts, where their unique style has always been well received.

Referred to as the Australian version of The Pogues, Shanks Pony are able to pull off a huge sound with only four lads on stage. They are a band that knows how to have fun, combining on-stage antics with up-tempo music. With lyrics ranging from the sensitive to the down-right rowdy this oz/celtic rock style has influences stemming from Weddings Parties Anything, Flogging Molly and The Pogues. Taking it one step further Shanks Pony has had a crack at traditional Aussie bush-folk tunes breathing new life into almost seemingly forgotten tunes. Their racy version of Ryebuck Shearer with a beer-chugging chorus is one that immediately has your feet tapping and always wins over an audience young or old. Their modern approach to songs about well known Australian bush rangers, sheep shearing traditionals and the old Australian lifestyle has brought these old tunes back into the 21st century.

Shanks Pony's debut CD titled "A Year in a Pub" was released in March 2007. Containing a total of eight tracks, six of which are their own originals is a great representation of what this band is all about. Not only has Shanks Pony spent the best part of a year (or so) in pubs plugging away at their music, the title track "A Year in a Pub" written by front man Pete Varcoe, is an absolute belter of a tune and is a true count of events that occurred in his life when his family owned a pub (The Yorkshire Stingo) in Melbourne, Australia. With a catchy tune and very moving lyrics, this song is one you'll be singing in your head for days. The CD also features songs about packing up your life in the country to move back to the city; a take on Australian business values; and Friday night pints with your mates. It also has a great modern rendition of an Aussie traditional bush tune "Lachlan Tigers" and some great harmony work in an old sea shanty "Whip Jamboree". 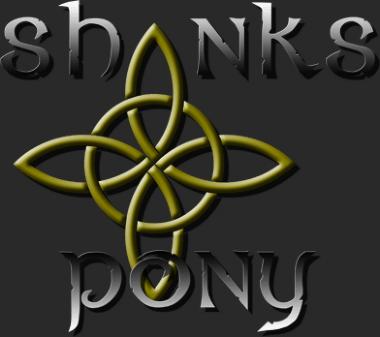