Classical Guitar Magazine, UK, praises Duo Lenz for their 'exciting ensemble playing, dynamic stage presence and an eclecticism which doesn’t preclude a substantial commitment to home-grown music'. Swedish Guitar Magazine 'Gitarr och Luta' writes; 'One of the most together guitar duos I have ever heard'.

It is their unique stage presence and skill that has led this dynamic duo to appear in numerous recitals worldwide, performing their broad and exciting repertoire.

Ruth and Richard Lenz were both well established musicians before coming together in 1997, not only as a professional guitar duo but also as husband and wife.

Duo Lenz's repertoire is very broad and they have been praised for their exciting, specially tailored programmes. Original compositions are a central feature of their repertoire, and many distinguished composers have been inspired by the duo's close ensemble playing to write new works for them. This has resulted in Duo Lenz playing and recording many premiere performances. Their programmes also include compositions written by Richard Lenz himself.

The range of guitars used by Duo Lenz is as extensive as their repertoire. They regularly incorporate the use of 'Early Romantic' guitars into their performances.

Their passion for the guitar and its ever-expanding music literature has resulted in Duo Lenz establishing themselves as one of Australia's leading classical guitar duos, admired unanimously by the press and audiences alike.

.......'The ensemble was tight, the tone rich and focused...... An engaging performance from an emerging combined talent',

Sample MP3s from 'From the Summer Solstice': 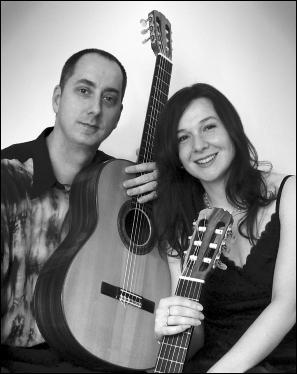