We are a Sri Lankan Trio and have been performing at various venues overseas during the last 3 years. We completed a gig in April 2007, in Oman and are back in Sri Lanka.

The trio consists of Guitar/vocals, Keyboards/vocals and a female vocalist. All three have experience performing at home as well as overseas individually, and as a trio since 2004. Whilst performing in Sri Lanka the trio was sponsored by the International Brand, Carlsberg to perform for special events.

We perform songs by artists such as

We currently have a repertoire of 300+ songs. We have experience performing as lobby/lounge artists, in pubs, clubs, dances, weddings and stage shows.

Click on the Media Tab to view the songlist. 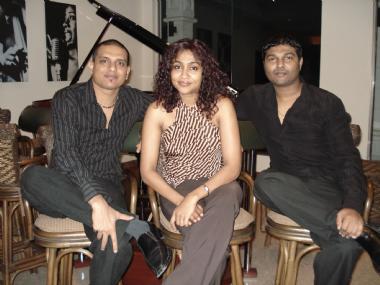