Singer, keyboardist and composer Sarah McCallum and percussionist, Paul Taylor are an exciting new duo. They perform a wide range of songs from the 60’s right up to the very latest in popular music. They play music with great sincerity and a sophisticated edge catering for focused listening while keeping the volume at a good level for patrons in the room to converse at ease. Sarah McCallum has been a professional singer and keyboardist for eight years.

Sarah is well known in New Zealand, having regularly performed solo in a variety of piano bars such as the Carlton Hotel, Sheraton, and the Gables in Auckland and performed and recorded with many known NZ bands, including “Farmer Pimp”, “Thrive”, and “Springfield”. She also featured as a soloist and backing singer in the highly esteemed Coca Cola Christmas In The Park in 2001, 2003 and 2005 which received national network television coverage. Sarah completed her Bachelor of Music degree at Auckland University with top marks in composition and electronic music in 2004. One of her compositions was recently performed by the internationally renowned Voices New Zealand Choir, which featured her piece on their new CD alongside pieces by several prestigious New Zealand composers. This CD won best classical album at the 2006 New Zealand music awards (Tui’s).

Sarah wrote, performed and recorded an album of her own compositions, “Goodnight Lonely Girl”, which was released in 2004. Sarah also writes music for T.V. She has composed and sung on advertisements such as the 2006 Mastercard/NZ All Blacks, “Black blood”, Bonds’ “No lines” and Foxtel “Classics” advertisements. Sarah moved to Sydney Australia in 2005 in search of even more musical adventures.

Also from New Zealand, Paul Taylor performs on drum kit and a large variety of percussion instruments from countries such as Brazil, India and Cuba. At just 17 years of age, Paul studied percussion at the University of Santa Maria in Brazil for one year in 2000. After returning to New Zealand, Paul completed a Bachelor of Music degree Auckland University, focusing on Jazz Drumming. Within that time he played and recorded with many artists and popular bands in NZ, including “One Million Dollars”, “Batucada Sound Machine”, and “Farmer Pimp”. He performed regularly with many seasoned NZ Jazz artists such as Murray McNabb, Kim Paterson, and Kevin Haines.

He moved to Sydney, Australia in 2005 and has quickly established himself as a freelance drummer/percussionist, playing in Sydney and other parts of Australia with popular artists such as Rick Robertson (D.I.G), Bertie Blackman and Steve Clisby. Paul accompanies Sarah with light, sensitive and tasteful percussion that adds rhythm and color to her melodies without bringing the volume level too high. The Sarah McCallum duo is a talented, artistic and professional musical group that will add warmth, interest and tone to your venue or event. 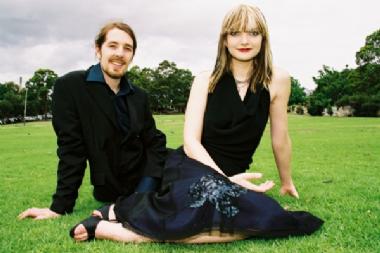