The ongoing revolution in entertainment - a revolution in concept, visualisation and sound - moves forward yet again with Controversy.

Playing party anthems by the truckload, Controversy countdown all the dance, rock and funk hits of the 80's. They have solidified themselves as a professional act and continue to remain at the leading edge of entertainment with countless shows, corporate entertainment and special functions. A wide selection of classic hits form an extensive repertoire from artists such as Madonna, Prince, INXS, Duran Duran, Divinyls, David Bowie, Billy Idol, Kim Wilde, Blondie, Bon Jovi, Technotronics, Paula Abdul, Michael & Janet Jackson, La Bouche & Europe just to name a few.

The presence and dynamic appeal of Controversy both as band and individuals is electric…both on and off stage. Spectacular presentation boasted by a sensational set list have inspired crowds and dominated dance floors from party people, music lovers to ‘controversial’ creatures alike! Controversy are not just a cover band...they are a phenomenon, a lifestyle and force to be reckoned with. They stand out in a class of their own and are undeniably 'The Definitive Music Experience'. Let their rock’n’roll run rampant on your soul!!! 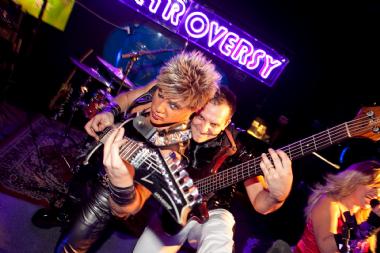