The show features together with Hernan Yoia, Alice Ons-Yoia, Christine Yoia, Cristian Silveira, Paola Alfonso and Graziela Yoia Gonzales, such grand artists as dancers and sometimes can incorporate some guitarristas.

All parts of the show are bound by Spanish way of feeling. All through the show we can see their deep beliefs, the essence of their traditions, the intensity of their myths, through a number of dances where flamenco rises from the very roots up to the highest branches, always from the heart and with a new spirit. Bulerías, soleá, seguiriyas, tangos follow one another so as to offer a bright, gleaming flamenco fiesta.

The show has now been enjoyed by over one million people all over the world, being unanimously and enthusiastically accepted by quite different audiences at various theatres and auditoriums. The show is passion, beauty and estilo 100%.

The show will be visit you anywhere throughout the world, be it your wedding, your birthday, your festival, your work function, your business presentation, your family gathering, your art exhibition, your party or any special event of yours.

Here is a brief outline of events in which the group has participated in: 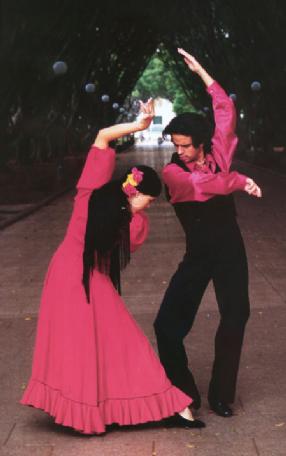