Since 1997 TaikOz has established a unique performance aesthetic that reflects the group’s passionate dedication to the forms of wadaiko and a desire to create new music for today’s audiences.

The ensemble has a range of full-length (90') productions that are suitable for concert hall and theatre venues. These include "Shifting Sand" and "Blessings Of The Earth".

TaikOz is also a very popular act on the festival circuit. Programs are designed to suit the more informal nature of these events.

The fundamental basis of TaikOz’s performance reflects three principal areas of creative endeavour: the creation of new taiko music by Australian and international composers, the study and performance of drum and flute music from Japan, and the interpretation of music of contemporary Japanese composers such as Maki Ishii and Eitetsu Hayashi. Our aim is not to simply transplant one culture’s music into another’s, but to allow a new form of music to grow upon a sure foundation of understanding and application of wadaiko technique and spirit.

From this basis TaikOz has developed its own sound by drawing upon the input of its members, whose musical backgrounds range from years of study and performance in Japanese traditional music, symphonic music, jazz and pop, as well as esteemed colleagues and teachers in Japan such as Eitetsu Hayashi, Fuun no Kai, past members of Sado no Kuni Ondekoza, and composer friends and artists, Meryl Tankard, Regis Lansac, Gerard Brophy, John Bell, Michael Askill , Timothy Constable, Graham Koehne and Andrea Molino.

Through the collective power of these diverse, but sympathetic, creative spirits, TaikOz has been able to forge a style all its own that reflects the members’ high energy, commitment and joy in making music.

Since the group's inception members of TaikOz have created over twenty-five original works for wadaiko, often featuring such instruments as shakuhachi, shinobue, nôkan, voice, percussion, marimba, saxophone, guitar and didgeridoo.

The ensemble has appeared on stages in Japan, Paris, Bangkok and most recently in Taiwan. TaikOz regularly performs in Australia's finest concert halls, as well as the theatres of regional Australia.

A brief overview of TaikOz's history:

Winners by Andrea Molino and the Queensland Symphony at the Brisbane Festival and Dresden Sinfoniker at the Pompidou Centre, Paris (2006) World Premiere Work

The group has released three CDs and a DVD, which was recorded live in Sydney's City Recital Hall, Angel Place.

TaikOz regularly performs concerts and workshops for Primary and High School students. Combining the power of the taiko drums with the hushed, ethereal tones of the bamboo shinobue flute, a typical 50 minute concert features performance of Japanese and Australian music along with student participation.

Our 50-60 minute workshops for schools introduce students to the power of the taiko drumming through the 'hands-on' experience. 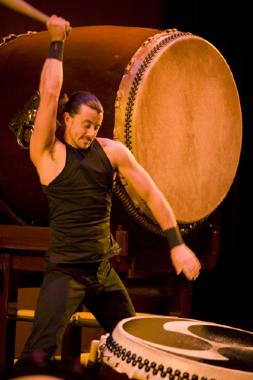