When times were tough live music got going……
The great depression of the late 1920’s saw music like the Negro blues, and the dust bowl era of Woodie Guthrie. In the 1960’s times were a changing. The dynamic rhythm and lyrics of Bob Dylan were number one around the world. People were healed and revolutions’ were started.  The musical styles of these artists were copied and new songs were written. New ways of playing were developed.
There are still musicians today, who carry on these traditional styles, but with their own soul and feeling added. The likes of C.W. Stoneking, with his contempory slant on traditional Hokum Blues. He has been nominated twice. And this year he received an ARIA award for the best Blues and Roots album of the year 2009.
Chad Swaby and Mark Anderson are also true to the old style traditions, of singing and musicianship. They add a modern flavor to this music.
Chad who is known around the South East Folk, Event and Pub scene in Toowoomba and Brisbane, for reproducing the sound and style of Bob Dylan, and others of the 1960’s & Golden Era. Performed with the group: Up in Folk. He has just released his first album: Soldiers and Slaves.
Mark aka Ruff-Cut Anderson, is well known in his own right for his banjo and mandolin playing ability. He is heavily influenced by the music of Tom Waits, Steve Earle, Stoneking and many Traditional Country Blues Artists. Mark has performed recently at the 2009 Woodford Folk Festival, and many other high profile music events over the past 12 years with band: Dirt Music. He has also been the opening act for the Brisbane Guitar Show since its inception in 2007, with the blues duo: The Jook Joint Boys. They also play clubs and regular café gigs around Brisbane.
Chad and Mark have combined talents, and are now performing under the name Acoustic Union String Band.    Together, they have created a fantastic show of songs. Paying tribute to traditional and modern artists, mixed in with breathtaking originals. All performed on string band instruments that are typical of the style. Banjo, Mandolin, Harmonica, Guitar and stomp box.  Producing a unique and unforgettable soundscape!
So come along to experience these guys. Let them take the depression out of this recession and have a great time enjoying one of the most unique duos around!! 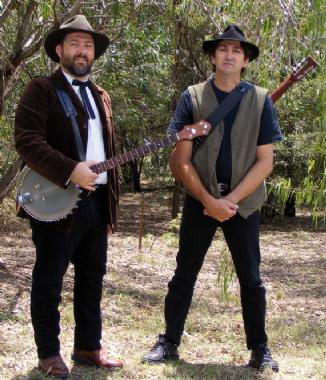