AndrewVictoria consists of singer/songwriter, entertainer/impersonator, VICTORIA BOLAND, and singer/songwriter, guitarist and occasional tribute artist, ANDREW RUDD. AndrewVictoria is primarily interested in contract band work in resorts, hotels and better venues worldwide, and during 2007 will be based in Hamilton, Ontario, Canada, making them unavailable for single day/night  events in Australia.

Victoria, an Australian/Canadian, is a multi award-winning singer whose credits include 2 scholarships to Boston's Berklee College of Music for her Jazz vocals, and the title of 2004 Female Champion in the Canadian Open Country Singing Contest. Victoria has worked and recorded with current members of Elton John's band (e.g. Davey Johnstone, Nigel Olsen and Guy Babylon) and has also performed for thousands in Canada at a Shania Twain Concert and at Queen Elizabeth's Golden Jubilee Celebrations. As well as being a singer/songwriter, who toured the UK with her own cd in 2002/3, Victoria is also a tribute act to Shania Twain, Tina Turner, Cher & Marilyn Monroe.

Andrew was studying at the prestigious JMC Academy of Music in Sydney, NSW, when he was offered a contract as lead guitarist and feature vocalist in the aforementioned Hong Kong dinner club. So successful was he, that the company extended his contract for a total of 16 months, and he took on the added responsibility of being musical director for the Legends Tribute Show in which Victoria was the female headliner in 2005/6. Andrew delighted the audience between costume changes with his incredible rendition of David Bowie's "Let's Dance" and his electrifying rock guitar instrumentals. Like Victoria, his stage presence, charisma and good looks make this duo a winning combination.

As a duo, this act covers over 400 songs from old standards to current hits. AndrewVictoria also offers clients the option of a full tribute show to Shania Twain, Tina Turner, Marilyn Monroe, Cher and Patsy Cline with all characters performed by Victoria and backed by Andrew on vocals and live guitars, with full band sound supplied by use of Roland Fantom XR and pre-recorded audio mixed through Pro-tools. Recently added to their tribute show are the characters of David Bowie, George Harrison and Buddy Holly, performed by Andrew.

Andrew and Victoria are professional entertainers and musicians based in both Australia and Canada, and as a duo, for 2007/8  are primarily interested in securing long-term engagements in upscale resorts, casinos and better hotels world-wide. Most recently, they have completed a very successful 6-month contract entertaining on a Holland America cruise ship (May - November 2006) 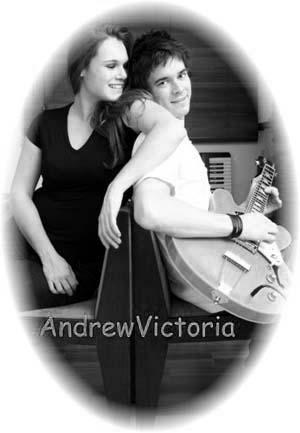