Bo Reissett offer 5 different musical acts ready to be performed in Duo, Trio, Quartet, Quintet formations. Jazz - Blues - Soul - R&B - Rock Red Velvet - Jazz Trio Bo Reisset is proud to introduce her musical trio (Bass, Piano/Guitar and voice), adding a warm atmosphere to your events. You will benefit from an intimate show featuring all the greatest Jazz, Soul and RnB hits from the 50s and 60s.

You will get a taste of cabaret-style performances with a touch of warmth and nostalgia. The music is altogether classy, sumptuous, accompanied with a powerful yet soft timbre voice - perfect for your cocktail, business or prestigious events. Lazy Bone Blues A highly colorful performance for those Rock n’ Blues die-hard fans featuring Bo Reissett and her quartet or quintet (voice, guitar, keyboard, bass, drums) – decadence in its purest form!

The band offers songs that are all too often neglected by the Blues scene due to the fact that not only is it is progressive music, but also very difficult to interpret, hence less accessible to the public at large! You will be lavished with top hits from the 60s and 70s such as Deep Purple, Allman brothers, Focus, Grand Funk Railroad and a touch of madness! Soulful / Soul - Jazz & Blues Bo Reisset is proud to introduce her five to seven pieces band (Drums,Bass, Guitar,Piano,Saxophone,Trumpet and voice), adding a warm atmosphere to your events. You will benefit from a great show featuring all the greatest, Jazz & Blues, Soul and RnB hits from the 50s, till today.

You will get a taste of cabaret-style performances with a touch of warmth and nostalgia. The music is altogether classy, sumptuous, accompanied with a powerful yet soft timbre voice - perfect for business or prestigious events. American Roads Duo, Trio, 4-5 Pieces Band Bo Reissett interprets Folk, Rock, and Country hits! Her songs range from CCR to Neil Young, all the way to Johnny Cash. She offers a show that includes songs everybody loves to hear when taking a road trip on a quest to great adventures and freedom! The show offers an acoustical duo (guitar/voice) or a quintet, if you prefer! (2 guitars, voice, bass, drums) Black Jack Hotel Duo, Trio, 4-5 Pieces Band Bo Reissett offers a unique performance with a repertoire consisting of Blues and Southern American rock, taking us back in time to the famous frenzied Louisiana “Bourbon Street” cabarets. This electric duo-style show (guitar and voice), features the singer accompanied by her talented guitarist - guaranteed to “wow” the crowd!

Along the course of her journey throughout the years, her musical path carried with it success and accomplishments. Nonetheless in the depth of her soul, she harbored a desire to step out of the familiar to experiment with new and different musical styles allowing for more freedom of expression. She began to explore the Montreal Blues scene and built close ties with friends and influential players in that particular milieu. She discovered her talent for singing when she began doing live shows on stage. Her new discovery elicited a profound interest to this day for this kind of musical genre. Her expressive voice tells her story and her charisma, passion and stage presence leaves the public breathless! Dominic Flibotte - Guitarist - Singer - Composer Dominic Flibotte, is a passionate guitarist whose father is also a musician. Dominic began his musical journey at the age of 13. From a very young age, he made his first stage debut in the Jazz, Blues, R&B, Pop-Rock, scene, and has since continued to perfect his guitar- playing skills. With a predilection for his versatile musical genres, he has driven across countless roads of Canada, United States, Mexico, Europe for more than 23 years, and to this day, he still has the crowd begging for more! With highly impressive dexterity, he has had the privilege of playing with some of the best Contemporary Blues and Rock performers. Among them, to name but a few, are Nanette Workman (Rolling Stones back vocalist), and Dawn Tyler Watson…. Endowed with indisputable talent, he distinguishes himself, among other things, by his ability to blend various musical styles which would otherwise be considered vastly different one from the other. However, Dominic manages to marry these styles together beautifully as his fingers dance across the frets which make for a simply fascinating sound and a spectacular show! 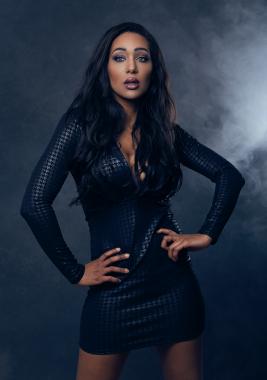