Mick & Lynda have worked together for the past seven years in a 7 piece corporate band and as a duo for about three years. They have a connection on stage which is apparent in their performances, each working off the others ad lib repartee.

Mick has strong vocals as well as a very quick comedic wit. He also plays Guitar, Bass, Banjo, Mandolin, Ukulele, Harmonica and currently teaching himself the Flute. He has a background in performing with Showbands and has toured extensively. Mick has played in a number of different genre bands including Pub Rock, Cabaret, R&B/Soul, Reggae, Theme, Nostalgia and Country. Mick has performed up and down the east coast of Australia and overseas in New Zealand and Vanuatu.Mick has also performed in Duos, Trios and Solo between the Gold Coast and Townsville. Mick is a member of Country Music Clubs and Ukulele Clubs in Brisbane.

Lynda not only has this wonderful vocal ability, she also plays Guitar and Drums. Lynda has appeared in music theatre including the lead role in "The Best Little Whorehouse In Texas" and other productions on the Gold Coast. She has performed the National Anthem at sporting events and performing on morning TV. Lynda has worked in Gold Coast bands for several years including duo stints and music theatre.

Mick and Lynda have an easy rapport with their audiences and involve them in their shows. With their show experience, it's not uncommon to see famous people appearing in their shows like Ulvis (the Kiwi from Graceland Bro!), Patsy D Cline, Julio Angelesi, Wooly Nelson, Sandy Shore, Leslie Corrrrr and Shirley Bassic. ROCK SOULT are "Seasoned Professional Entertainers" guaranteed to have your audiences wanting more. 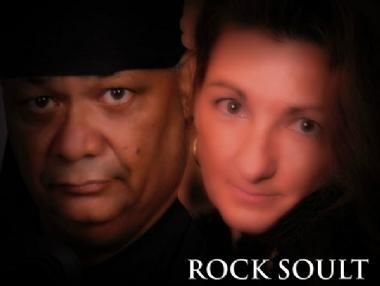