Flirting Mazurkas is a versatile group based on the skills and charms of some of Melbourne’s busiest musicians. They play their favourite and most requested songs and tunes, from years of experience playing at weddings, parties and events. The gorgeous Jennifer Hawley sings and plays guitar, the debonair Phil Carroll plays keyboard, accordion, flute and sings backing vocals, the passionate Mathew Arnold plays violin and the handsome Conrad Henderson plays bass.

They feature favourites and oddities in the style of European café music including Jazz, Gypsy, French, Latin, Italian, Tango and more. If you ask for it nicely you can even have a Polish Mazurka. These songs and tunes are all cleverly arranged to produce an atmosphere for flirting and dancing, if it is legal. The band holds no responsibility for who flirts with whom!

Jennifer has been playing in bands in both Melbourne and Sydney for the past ten years and has established a fine reputation as a guitarist, singer and composer.  Originally based in Sydney, Jennifer trained classically and played in local rock bands around Sydney and country NSW.  She now has diverse interests in jazz, French, Brazilian, gypsy and folk music. Previously a member of the gypsy jazz group, Continental Drift, she now works with Siren, Flirting Mazurkas, Parisienne Swing and Ruby and Ginger.  Jennifer has worked at a number of Australian festivals including St Kilda Festival, Inverloch and Echuca jazz festivals and plays regularly at venues around Melbourne in her own jazz ensemble.

Phil (accordion,piano ,flute,vocals) has played in bush bands since the 80's. He has had  piano residencies in hotels, as well as freelance piano and flute work in studios and various groups. Phil has  been involved in World Music playing with Indiginy Music Ensemble full-time at Ayers Rock Resort for 18 months. He leads the Middle-Eastern music and dance ensemble Yalla! and plays with Klezmeritis. He also plays with French, Latin, jazz, gypsy and continental groups. He has composed music for films, documentaries, music ensembles and dancers.

Mathew Arnold (Kavisha Mazzella, Brent Parlane and sessions for film and television) has been playing violin and touring both in Australia and around the world for many years, developing his talents in a diverse range of musical genres, such as swing and Latin jazz, Celtic, continental, classical Indian and eastern European styles.

Conrad Henderson is a versatile bass player with 20 years experience in Australia and overseas. With diverse musical interests, he has been a much sought after player in jazz, Latin and funk groups in Melbourne.  Conrad has toured extensively in England, Europe and America and recorded on many sessions, including Gong (England) David Allen (England) and Phil Judd from Split Enz(Australia).  He also plays with French African group, Warako Musica, who recently won the best world live music act for 2000. 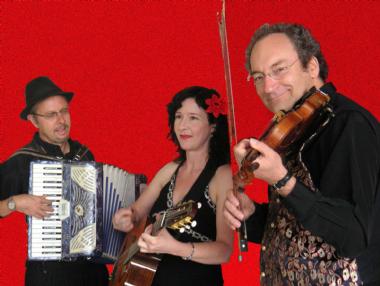