Two Hearts Duo is a unique and classy professional musical act comprising two vocals, keyboards and cello.   Our song list ranges from piano men like Elton John, Billy Joel and Peter Allen to Jazz Standards, The Beatles, Broadway and even a touch of Classical.   As the night warms up we'll launch into all your favourite party songs so you can sing and dance the night away.

We play everything from Leonard Cohen's "Hallelujah" to Michael Jackson's "Blame it on the Boogie" and we can create an arrangement of your favourite song for your special function.
Add a touch of class to your next special event with Two Hearts Duo

Two Hearts Duo can also provide classical and feature entertainment acts.  We can package these with Two Hearts Duo or they can be booked individually.  Please search the following names within the Entertainoz Website:

2.  Crocodile Rocket - Australia's tribute to Elton John
3.  Adelaide String Duo - a classical duo (violin & cello) for weddings and smaller functions
4.  The Cello Guys - a contemporary instrumental duo of piano and cello
Performance History:
The wife and husband duo (cellist Jacqui and pianist/vocalist Brenton) have taken their music all around the world, including an Alaskan cruise season for Princess Cruises (US), and repeat engagements as onboard entertainers on the iconic Spirit of Tasmania. Jacqui Edgecombe has played cello with the Sydney and Adelaide Symphony Orchestras, as well as being half of the multi-award-winning cabaret act “String Fever”. Husband Brenton (the other half of “String Fever”) was also a finalist in the Musical Theatre vocal section of the Sydney Performing Arts Challenge.
Now performing at weddings, corporate functions, clubs and private parties across South Australia.
Songlist (Inst = "instrumental")

We also have a wide range of music arranged for violin and cello duet, not included on this list.

Client to provide: meals, refreshements and parking close to venue 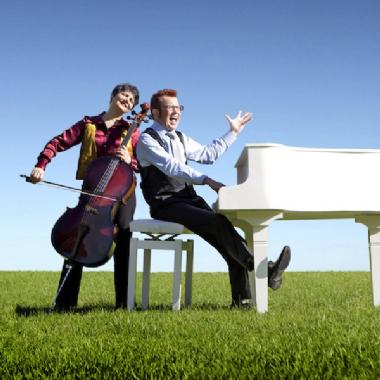