Brandon Woods is one of the most unique musicians of the twenty-first century. A Celtic trained violinist from Hervey Bay, Queensland who currently resides in Brisbane, Queensland, Brandon has taken the traditional sound of the violin one step into the future by incorporating the elements of electronic music to form an addictive, edgy and electrifying extravaganza. In his early years as an artist, Brandon was stuck in a studio, finding the perfect balance between electronic music and violin.

After three months of pen to manuscript, he evolved with the release of his first single, titled “Cyberfiddle” in May, 2014. Thanks to the Australia-wide success of the song, Brandon gained thousands of fans on social media, and by popular demand, released another single titled “Vortex” in February, 2016. The popularity of “Vortex” pushed Brandon to write eight more tracks, which eventually formed Brandon’s debut album.

Immortal Symphony, released in August, 2016, featured 10 original electronic and dubstep inspired tracks, including “Cyberfiddle” and “Vortex.” Prior to the album’s release, Brandon won three gold medals at the World Championships of Performing Arts, an international performing arts competition held in Los Angeles, California in July, 2016. After returning to Australia for the release of the record, he embarked on a Queensland tour, which included performances for the Royal Queensland Show’s nightly spectacular, EkkaNITES, as a guest artist. Over the course of the 10 nights, he performed to a combined crowd of over 150,000 people.

Being raised in a musically diverse community, Brandon topped his high school music class, and is currently studying the Bachelor of Music course at Queensland University of Technology. With his credentials including Australia’s Got Talent and the World Championships of Performing Arts, he is constantly leaving audiences across the world breathless. He does more than just put on a show; he creates the show, and makes the audience feel the music. In Brandon’s words, “It’s not about hearing the music; it’s about feeling the music.” 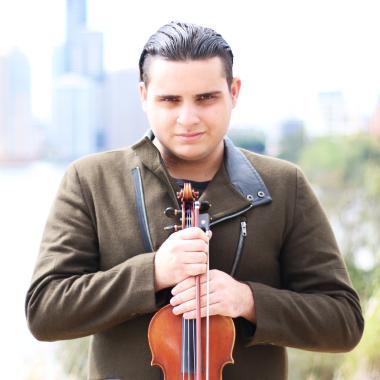