Request a Quote
Ross  Stewart was born in Alloa, Scotland, one of eight children and the son of a well respected Band Master. He began his musical career at age 15, when he joined the British Army as a junior musician.
He was soon selected as a candidate for training at the Royal Military School of Music (Kneller Hall) in all aspects of music, and upon completion was recommended for the Bandmasters course.
From here, he traveled to Germany to join his Regiment (Cameronians) as a fully-fledged musician. The regiment disbanded in1968 and Ross was transferred to the Royal Artillery Band (Woolwich).
In 1970 he joined the Royal Australian Air Force Band in Melbourne and served there for 6 years.  During these years the RAAF Band was awarded many coveted international awards and secured a Gold Record for the recording, "30 Smash Hits of the War Years".  The highlight of this time was performing at the opening of the Sydney Opera House.
During his distinguished career as a musician, Ross has performed for various professional recordings, participated in the Edinburgh Tattoo on numerous occasions, performed for Queen Elizabeth II as she visited Balmoral Castle and during her appearance at the 1983 grand opening of the "Cinecentre" cinema complex  in Perth, Western Australia.
He was also on duty for the Changing of the Guard at Buckingham Palace.
In 1976 Ross decided to move to Perth, where he began teaching brass instruments and Band for the Education Department. Later, he settled into music teaching and administration at Scotch College, Perth where he was employed full-time finally retiring as the Head of Music in 2008.
Despite his diverse and intensive training in band music, Ross's great love of Oberkrainer music, keeps him busy with writing and arranging music plus organising many local and state-wide concerts with Anna.
Anna  Stewart was born in Geraldton, Western Australia - one of four children and the daughter of a semi-professional Piano Accordionist,  she was immersed in music from birth. During her childhood, in addition to eagerly enjoying her father’s accordion practice sessions, her home was ever filled with the sounds of classical music and opera and it was during these formative years that her great appreciation of the human voice was steadily incubated.
Trained on classical piano, she later diversified, learning clarinet and quite suddenly in 1978 became enthralled by the ring of German Folk Music. Having studied the German language, she passed Year 12 examinations in this and later joined the "Rhein-Donau Club" (German-speaking Club of Perth) where she was introduced to the rest of German/Austrian culture. Initially, this was a social association, but Anna later found that many musical instruments fascinated her and so she began intensive training on saxophone, guitar, piano/button accordions, cowbells, singing and yodeling.
Not long after, she was invited to accompany the highly acclaimed "Edelweiss Dance Group" (traditional Bavarian Schuhplattlers) on accordion and was their accompanist for a number of years, being involved in folk festivals and many other German festivities. To keep in touch with the saxophone, in 1982, Anna joined the Channel 7 Concert Band appearing on Telethon and at various other local venues.
During this time, a tragic car accident interrupted Anna's life and so her musical career was put on hold while she recovered from multiple injuries.
Despite the physical and psychological trauma, Anna forged ahead and from here, joined the "Swiss Yodelers" as accordionist and yodeler, enjoying such opportunities as playing for Channel 7's Jenny Seaton on the "Good Morning Perth" programme, ABC Radio with David Hawkes, and at many other venues such as the Hyatt-Regency Hotel and Burswood.

Between 2001 and 2008 Anna worked full-time in the Australian Music Examinations Board office and during that time was also  a Piano Accordion examiner for the AMEB.

In 2009, the Duo  moved to the Great Southern region of  W.A. and are already wow-ing audiences far and wide with their unique and multi-talented act.

W.A.'s No.1 choice in Oktoberfest/German music and bringing you one step closer to Heaven with stirring, spiritual presentations. 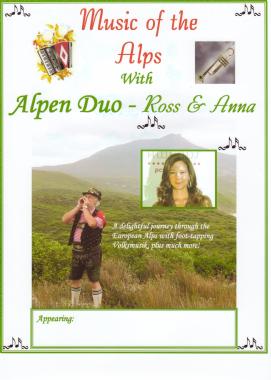