Sydney French Music is a collaboration with Corinne Andrew and Viva the band from Sydney, Australia

Corrine was engaged as the starring act in French cabaret performances throughout the Far East and South East Asia including Japan where she completed a three year stint  at Cordon Bleu in Tokyo and the New Fujiya Hotel Atami, she was also contracted as a session singer for Toshiba EMI studios.

Corinne was invited to Australia as the principal feature singer and dancer in a show called "A Journey to Paradise" at the Gold Coast Casino for a period of 18 months.

After a break of a few years raising her family, Corinne has recently embarked on her singing career in Sydney, teaming up with established Northern beaches exponents’ of French music, Viva the duo.

Corinne and Viva's performances gives the listener the benefit of listening to International music that has been developed by Corinne and the duo's lifelong experiences and overseas music engagements, for example, it's nice to hear a piece of music that inspired the Trio whilst they were in France, such as La Vie En Rose or Under Paris Skies etc, the music accompaniment on accordion, guitar and flute is authentic and the listener could easily imagine themselves to be in Paris listening to a local band performing popular Edith Piaf tunes and romantic cafe' tunes.

Other examples are the bands tunes include: It Had To Be You, Stardust, In the Mood and many classic standards popularized by American Jazz singers.

VIVA THE Band are Sydney’s premier international band, they are experienced performers who play music from all around the world. They also provide engaging tango, Latin, jazz and swing music for dancing 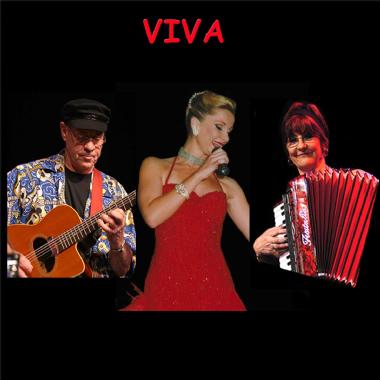