One is a reference of bossa nova, one of the pillars that helped lift and make the brazilian style consistent. The other is on the list of greatest guitarists in the world and printed a rather peculiar mark to playing rock. Despite the different stories, Roberto Menescal and Andy Summers have many points in common.

Menescal has not passed the career connected just a stool and a guitar. He plays the guitar, and he has done work on the rock - for exemple he produced Raul Seixas. Summers, thought it is always associated with "The Police", which is normal, directed his solo career to jazz landscape. By remembering that bossa nova was a major influence in jazz, we can solve the equation that unites these two musicians.

The close relationship between them have some time, but only now won an official register. United Kingadom of Ipanema - Roberto Menescal invites Andy Summers was recorded at day 19 of November 2008 at the Teatro Sesc Ginástico, in Rio de Janeiro. Brings a repertoire with songs of "The Police" and a lot of bossa nova, all chosen, of course, the two heads. "The fact Andy doesn't just rock player and I'm curious about others styles, he accept this challenge, which has given us a lot of satisfaction" says Menescal.

Celebration is a good word to use when you're thinking about United Kingdom of Ipanema - Roberto Menescal invites Andy Summers. The images leave no doubt that Menescal and Summers are comfortable enjoying every note, every chord and every melody playing. And are enjoying doing that together. Just watch the first songs to see how intense their chemistry works on stage.

If Menescal is comfortable in "blood" rocker in the swing of "Roxanne", Summers shows enough intimacy with the balance of bossa nova in the solo of "The girl of Ipanema". The guitarist won quickly the hang of it, like Menescal, tell us: "Andy fell in love with brazilian music and bossa nova in particular, when he heard the song many years ago "Manhã de Carnaval". Thereafter he began to hear a lot of things and trying to do the "bump" of bossa.

When we started to play together (2007), he created his own beat of bossa. A year after that at the concert we made for DVD, he was already well "creased".

Of course the work as a whole, left the pair with a smile from ear to ear stamped on his face. However, there's always this or that song was left with a finger more tahn pride. The brazilian host reveals his preferences: "Sem dúvida", "Manhã de Carnaval" and "Roxanne".

So, that's it! Ah yes... maybe you thought to ask about the title "United Kingdom of Ipanema"! Well, the explanationis that you probably guessed: Andy Summers is a british musician and Roberto Menescal is a brazilien musician that left his heart in Ipanema. Understand?

Finally it remains to mention that Roberto Menescal in November 21 (2013), attended the 14th Annual Latin GRAMMY Awards to receive your careear GRAMMY Award more than deserved for 40 years devoted to music.

The rest is pure art. Enjoy it!

Themes playing in the show: 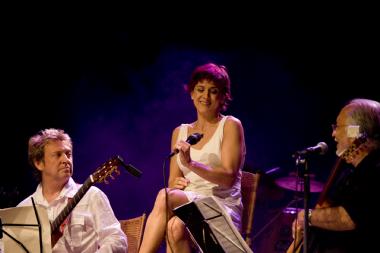