Bamhum is a new wind musical instrument invented by a band member Moa and Howey is a new world genre developed by the band. Aeon Spell will be released in June by Saregama HMV.

Biography
Abiogenesis is into experimental music and their tireless effort has resulted in developing a new genre which they have named it Howey Music. It's a fusion of Naga Folk tunes with modern rock. Another outstanding feature is that they play a new wind musical instrument made of bamboo which was invented by a band member- Moa Subong . Bamhum was unveiled by the Governor of Meghalaya during the International Bamboo festival on 3rd May 05 at Shillong. Meghalaya. Abiogenesis is the only band in the world that plays Howey music and the Bamhum. 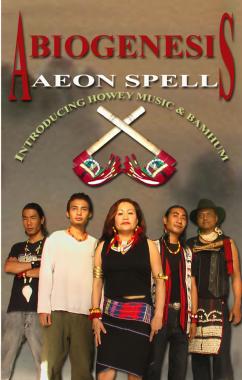