GypsyLou is a two-part vocal harmony duo with guitar accompaniment, playing original indie-folk songs plus covers of popular music performed in that style.

Carrie Lee is a singer/songwriter who has been performing music in Perth for the past 8 years, involved in various cover bands and projects as a singer and guitar player, and as a solo performer. Her influences are ecclectic, including blues, jazz, rock and folk music.

Katie McMahon hails from Scotland, and is well-steeped in the traditional music of that part of the world. She studied music extensively throughout her schooling and has been a member of various choirs. She particularly enjoys singing in the Scottish national language of Gaelic and revels in its unique traditional sound.

Carrie and Katie met through their involvement in the Perry Joyce choir "Quire: Vocal Addiction" and founded the duo on their love of singing in two-part harmony.

GypsyLou can bring a fun, relaxed atmosphere to markets, family events and Sunday sessions, with well-known tunes and warm, beautiful harmonies. They can also bring traditional repertoire from Ireland and Scotland, including Gaelic language songs.

GypsyLou is also available as a trio, with superb percussionist John Donoghue or fiddle player Matt Stapleton to add more of a Celtic folk flavour. 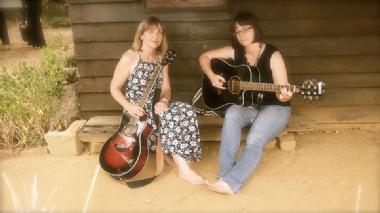