“In the past years Masterpiece have performed in: New Zealand, Malaysia, Indonesia, Queensland, Adelaide, Ayres Rock and Hayman Island”

Since their conception in June 1994 Masterpiece have been astonishing audiences with their infectious dance music both Nationally and Internationally.
The band has a base of six of Sydney’s most seasoned musicians and singers all dedicated to a high quality of audio and visual entertainment. Over the years the band have had many special guest performers and on many occasions the band have extended to a nine piece adding a brass section and percussion for a full big band feel.

With an ever growing repertoire of over 200 cover songs the diversity of the repertoire is amazing. Slick sounds of cool Jazzy style numbers are perfect for cocktails or over dinner music. Then they can take the audience through a journey from the Top 40 hits from the 50’s to the most current songs on the radio today. The band takes classic songs and transforms them with a modern feel as well as great harmonies and soulful vocals - this band has a broad appeal.
Having performed over 1500 shows in Sydney’s high profile hotels the band has also made its mark on the corporate market. They have performed for such companies as Daily Telegraph, Sydney Olympic Committee, Channel 7 as well as high profile events - Cointreau Ball, 2 Day FM Celebrity party and the opening of Phantom of the Opera. The band has also lent a hand to such charity functions as Jeans for Genes Ball, Freidrick’s Ataxia foundation and Batten’s Disease. The band is also a favourite for private party's and weddings.

QUOTES:
….I had people tracking me down on the night to say how great they thought the band was…we had quite an array of people to keep satisfied and you managed it without a hitch…
DAILY TELEGRAPH
…I enjoyed their C.D. but was not prepared for how good they were in person…superb vocals and tight musical arrangements and a very professional production…I would not hesitate to recommend Masterpiece for anyone wanting a great sound and a packed dancefloor….
NEWSAGENTS ASSOCIATION
…in the past years we have had a variety of well known bands but I have never before experienced the positive feedback from our guests as I have with Masterpiece..there wasn’t an empty spot on the dancefloor
THE AUSTRALIAN OPERA
..Masterpiece were a great success and we had some fantastic feedback from our V.I.P. guests…
THE COINTREAU BALL
..I must say it was easily our most successful staff party in ages..they had the dancefloor packed for the entire night and I have had an excellent response from staff of all ages….
CHANNEL NINE
Our current style and repetoir is reflected by the following artists... 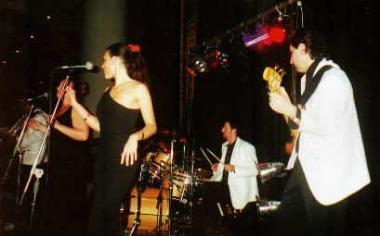