BIG MAMA - The name says it all! A big voice with an even bigger personality to match! With almost 20 years of performance experience under her belt, and known for her bubbly personality and backed up by her extensive knowledge of the local music scene and it’s musicians, she is a class act.

SEXY SOUL - Backing up this power house vocalist is her band Sexy Soul. Made up of some of the best musicians in town, this dynamic group of people come together to deliver music with funky melodies that will make you feel good and get you up on your feet. The bands musical roots stem from the smooth styling’s of Soul music, the gritty lyrics of the Blues to the upbeat melodies of infectious Reggae music. Big Mama’s got soul, she’s got attitude and she’s bringing Sexy back with her band of 4 merry men & 2 funky chicks! BIG MAMA & SEXY SOUL-LET THE GOOD TIMES ROLL!!

Sexy Soul Band
Sexy Soul was formed in 2009 by Big Mama, who has been performing in and around Brisbane for more than 15 years.

From a karaoke bar in Caxton Street to the excitement of performing with a live band, the desire to perform on stage is what inspired the inception of the Sexy Soul Band.

Starting out as a Soul & Reggae band, playing at pubs & clubs all over Brisbane, Sexy Soul quickly gained a reputation as a quality band providing quality entertainment & having some of the best known musicians in town in it’s line-up.

Taking a break in 2012, the band came back bigger and stronger in 2015 with a stellar line-up of musicians and a new musical direction inspired by Big Mama’s mentor, Brisbane’s legendary blues man Wiley Reed who gave her the encouragement and support she needed to continue her musical journey.

Since reforming in 2015, Sexy Soul has worked steadily at some of Brisbane’s premiere venues, with an 8 month residency at Mr & Mrs G on the Riverside being their most noted venue where the band’s reputation really took flight as a band that delivered great high energy performances and always had the crowd on their feet till the last song!

Sexy Soul has also performed at other well known venues such as Wynnum Tavern, Park Ridge Tavern, Victoria Point Tavern, Lock’n’Load (West End), Miami Marketta & Mt Gravatt Marketta. They also recently performed at last year’s West End Festival and was a crowd favourite. They are much sought after band for private functions with weddings being their most requested booking.
The band also give back to the communities that support them by performing at fundraising events such as Relay For Life for the Cancer Council, The St. Peter Chanel Gala Fundraising dinner and cultural events such as Morehu Day & Waitangi day at which the band donates their services or performs at a heavily discounted price to accommodate the event’s budget.

Now a 6-7 piece band, with Big Mama up front performing sassy soul & funky blues, Sexy Soul is a band like no other and a must for any venue, occasion & community event.

Big Mama-Lead Vocals
Growing up in a musical family with a father who had the most amazing, richest, baritone voice, Big Mama’s love of music began from listening to the smooth sounds of that voice. Her passion for music, in particular Soul music and her love for the Blues, has inspired the inception of the Sexy Soul band. Providing a huge sound upfront with an energy & unique performance delivery to match, Big Mama takes Sexy Soul to its highest entertainment level.

Wiremu Pihema-Drums
Hailing from the far north of Aotearoa, Wiremu began playing drums at an early age & has held a lifelong love affair with Reggae music. Since joining Sexy Soul, he has expanded his passion for music by marrying Soul & Blues to his love for Reggae music. Bringing his own style on the sticks, Wiremu is the heart beat of Sexy Soul.

Tui Paekau (Toots)-Lead Guitar
An original member of the band since being founded in 2009, Toots started out filling in for the band on keyboard and eventually became a permanent band member as lead guitarist. With the ability to play keyboard, lead & bass guitar and having an awesome vocal range, he compliments the Sexy Soul line up in every way. Regarded as being the right hand to band leader Big Mama, Tui is a must have musician that brings knowledge, experience and the best sense of humour making him irreplaceable in the Sexy Soul line-up.

Martin Grigg-Keys
With years of experience playing for some of the best party bands in town such as Caribbean Kings, Azitiz and Hanky Panky, Martin has honed his skill on the keyboard, and is at home working at major corporate functions, resorts to festivals and clubs. With the best work ethic and commitment a person could have, his easy going personality and can-do attitude makes working with him a genuine pleasure. Responsible for the band’s equipment, sound, musical arrangements, marketing initiatives and extensive knowledge in photography & providing the band’s rehearsal space, Martin is also regarded as a right hand to Big Mama and an invaluable and much loved member of Sexy Soul.

Craig Hamilton-Bass
Brisbane based bass player Craig is the newest member to the Sexy Soul line-up. Originally from the Sunshine Coast, Craig has played with many cover bands over the years. He has toured the UK and Europe with the renowned international blues artist Rob Tognoni. Craig has lived in Brisbane for the last fifteen years and made his mark with a number of cover bands, including Whiskey & Rye, Rockbreaker, Down Under, Just Like That, A Noble Few, The Selfies, Flat Chat, We're No Angels, Harro's Party, Rastafarian Stagedivers, Space Cadet, Engineroom and more recently popular local blues band Howlin’ Time.Craig’s commitment and easy going attitude coupled with his extensive years of experience makes him a valued and welcomed addition to this group of exceptional musicians.

Rochelle Cooper-Background Vocals
From a small town in the East Coast of New Zealand, Rochelle is a passionate about music and Kapa Haka (Maori Culture). She started her musical journey in a family band singing covers of reggae, motown and old school RnB. Influenced by New Zealand’s reggae bands and having a particular love of country music, Rochelle’s musical taste crosses a variety of genres. A member of Sexy Soul line up for the past 12 months, Rochelle has proven to be a worthy band member. With a beautiful voice that has an amazing top range, Rochelle brings full rounded background vocals to the Sexy Soul sound. 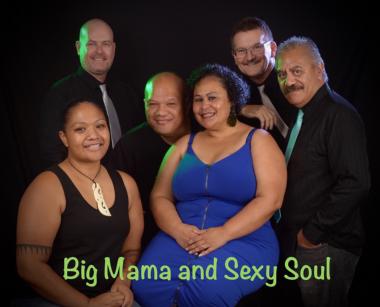