Tom plays all styles of music including Latin, classical rock, blues, fusion-jazz, and country. His preferences are most anything in the Latin spectrum on the acoustic side, in particular Flamenco and Brazilian music, with the funk/fusion idioms to his liking on the electric side. “All of those styles groove and syncopate, which is what I like."

Duarte plays electric and acoustic styles equally well. He can stretch out on a funk jam as well as handle an intricate Flamenco solo. A self-taught guitarist, he studied jazz in college, but was already gigging professionally by then. “I had figured out for the most part what they were doing – they basically just told me what to call it.”

Duarte's musical style is firmly based in traditional Latin music, while referencing elements of funk and jazz fusion. His  playing remains beautiful and communicative throughout, reflecting a true sense of the gypsy spirit. In his solo acoustic playing, as well as in his searing electric solos, he plays with a passion that equally captivates the listener.

Duarte has performed at The House of Blues in Chicago, New Orleans and Los Angeles, B.B. King's Club in New York City, Irving Plaza in New Yor City. In the San Francisco area he  has performed at the legendary Fillmore Auditorium, Warfield Theater, Great American Music Hall, Sweetwater in Mill Valley, Grateful Dead members Bob Weir and Phil Lesh's TRI Recording Complex, Fenix night club in San Rafael, Performances at Six series at Embarcadero Plaza in San Francisco, literally 100's of wineries in the Napa and Sonoma Valleys, The John F. Kennedy Performing Arts Center in Washington DC, several high profile rock and jazz venues throughout the United States. With a background in orchestral music, he has performed in the orchestra pit for several musical theater productions including Jesus Christ Superstar, Evita, Cabaret, Hair, Man of La Mancha, James and the Technicolor Dreamcoat, Bye Bye Birdie, Godspell, Fiddler on the roof, A Chorus Line, and Will Rogers Follies. As a touring musician, he has peformed with Jerry Garcia and Grateful Dead keyboardist Merl Saunders throughout the United States and Canada. He has been a solo guitarist on cruise ships for Princess Cruises in the Mediterranean, Caribbean and South Pacific Seas. He supplements his schedule with performances for corporate and private functions throughout the San Francisco Bay Area and Napa Valley Wine Country. 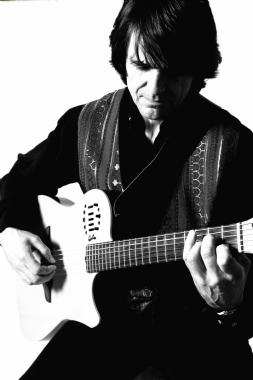