Inspired by the music of Argentina, ‘Alturas’ combines influences from classical, latin and tango to create a unique blend of haunting melodies with jazz-inspired solos.

'Alturas' have been performing as a group since 2009.  The group started as a duo with Gaye Thomas - flute and Jane Andino - piano.  It has over the years grown to become a quintet, performing throughout  Eastern Australia.

Twice the group have performed for the National Argentine Day celebrations in Canberra, at the request of the Argentinean Embassy.

The CD launch concert at North Sydney's Independent Theatre was a sellout, and the CD has received regular airplay on ABC Classic FM and Radio National.

Gaye has been performing latin music for over 20 years.

She studied flute at NSW Conservatorium of Music with Jane Rutter, and went on to perform and record with classical, latin and contemporary ensembles.

After falling in love with tango music, Gaye established Alturas with Jane Andino.

Inge is a Sydney-based violinist with a diverse background in classical, jazz, blues and tango Music.

After completing her studies in Europe, she has played, toured and recorded with many orchestras, bands and ensembles.

Inge particularly enjoys chamber music as well as the beauty and passion of both traditional and modern tango music.

Greg has been playing in the Sydney region since 1980 when he studied at the ‘State Con’.

In the mid 80s Greg met Jane Andino and Salsa. A good decade disappeared in a blur of late night salsa gigs and a strong musical bond was formed.

Stints as leader of various chamber jazz ensembles, including Zero Hour, have brought Greg back to Latin music in Alturas.

Jane Andino is a pianist and composer, performing and writing in Latin-American, Jazz and Classical styles.

She was a founding member of the tango group, Alturas.

Jane is also currently recording a CD of original compositions with Greg Gibson.

Adam is a freelance bassist who also is a member of Frank Zappa tribute band, Petulant Frenzy! 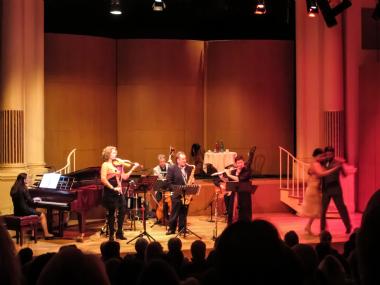