Duo Viva is an instrumental duo that take care to present themselves in a manner appropriate to the event.

The duo has a carefully selected repertoire designed specifically as an attraction to cater for parties, wedding receptions, marketing events or in-store promotions, ceremonies, gala events or special functions.

Their repertoire includes tunes that are either lively or light, including: classic show tunes, romantic French and Spanish tunes, jazz, swing or salsa and latin tunes. The duo can be extended to “hot club” gypsy swing trio with the addition of jazz violin or trumpet.

The duo and trio have performed at many themed events including : “Moulin Rouge” party at Tumbalong Ballroom, “A Night in Paris” at Thredbo, “A Night in the French Quarter” at the master builders club, Wollongong, promotion for “Les Genies de la Mer- Masterpieces of French Naval Sculpture” at the Australian Maritime Museum, A French themed function at Kiama Jazz club, multicultural events at the Sydney Royal Easter Show and Macquarie Mall at Liverpool, a special cabaret presentation at the Miss World ball at the Four Points by Sheraton at Darling Harbour, and special music presentations at Sydney Olympic Park.

The Duo Viva are the founders of Viva the band which is well known for their International performances, recently they performed at festivals through Taiwan in 2004 and 2005. The band is also popular at local festivals including: Gold Coast, Thredbo, Newcastle, Morpeth, Gosford, Manly, Illawarra, Kiama, Sydney Olympic Park, Darling Harbour and Jazz in the City at QVB.

The Duo Viva  repetoire is extremely broad and encompasses music suitable for : Ceremonies, Functions, Events, Parties, Festivals, Backgroung music etc.  For the purpose on In-store promotions  or marketing  events  a selected repertoire of up- beat tunes are utilized specifically for the purpose of attracting attention.

The Duo Viva is particularly unique and special, normally a band of this style and international experience would only be found in France or Spain.

Viva the Duo (Instrumental) Viva the Trio, Viva the Quartet, vocalists Corinne and Estelle Andrew
Viva the Duo has International experience having performed across South East Asia including: Thailand, Vietnam, The Philippines, Guam and Japan, plus promotional tours across Europe, including visits to: France, Monaco, Spain, Italy, Switzerland and England. The duo also
toured throughout South America including: Argentina, Brazil, Cuba and New Orleans

The duo has an extensive repertoire of Instrumental music including: music from UK, France, Spain, Italy, Russia, Cuba, Argentine, Brazil, Mexico plus, standard tunes from the American and British songbooks.

The (instrumental) duo is suitable for music at restaurants, hotel foyers, piano bars and outdoor events

Viva the Trio features French vocalist, Corinne Andrew, whose career has seen her perform as principal singer and dancer at many of Europe’s major music cabaret venues including Follies Bergeres, Palais Des Congres, Paradise Latin and in venues throughout Monaco and Italy.
Performances in South East Asia include the prestigious Cordon Bleu, Tokyo and the New Fujiya Hotel, Atami.

Corinne arrived in Australia as principal singer and dancer for “A Journey to Paradise”, hosted by Jupiter’s Casino.

Corinne is starring in a production called Piaf &; Aznavour “Back In Time” the show is featured at venues throughout NSW and Victoria

Corinne sings in French, Spanish, Portuguese, Italian, Japanese and English with songs ranging from Edith Piaf classics to songs from the American Songbook.

Viva the quartet is comprised: Viva, the duo with Corinne Andrew and the introduction of Estelle Andrew. The combo showcases a night of European classics, a mix of contemporary music and jazz standards. A highlight of their show is a production of Chanson Des Jumelles (ladies of Rochefort)

It Had To Be You 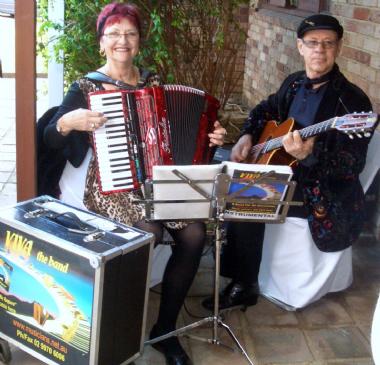