"…This music is so deeply moving and so ethereal in its beauty that it's easy to overlook the sheer virtuosity of Michael's playing...Michael contributes equal parts in musicality, spirituality and humanity to these works, leaving listeners totally transfixed…"
Owen McKern
Program Manager
3MBS Classically Melbourne

"...Michael Johnson is one of my very favourite performers in the world today. his unique and totally original compositions are not to be missed.....A truly inspiring experience..."
Graham Goble (Founding member of The Little River Band)

Michael Johnson
Performing on the harp, Michael Johnson should be familiar to audiences throughout Australia. His compositions are regularly aired on national radio and television.

Michael is one of Australia’s finest instrumentalists and has performed in many major concert venues and festivals around Australia to sellout audiences. He performs a repetoire of original and traditional compositions drawing influences from Ireland, Wales, Scotland, Spain, South America and from the renaissance to the present day.
He has gained a large following throughout the country and overseas.

He is currently resident harpist and composer at the Royal Botanic gardens Melbourne.

He has performed alongside an eclectic combination of artists such as Judy Jacques, Christine Sullivan, Kavisha Mazella, James Morrison, Suzanne Johnston, David Herschfelder, Donald Cant, Judith Durham...
just to mention a few. He has composed the music for Seven recordings and appeared on a C.Ds by Graham Goble ( ex LITTLE RIVER BAND)and David Jones.

This is by no means the full list but will give you an idea of what we play.
To here any of the the original pieces , his CDs are available through the Royal Botanic Gardens Shops and Various other retail outlets 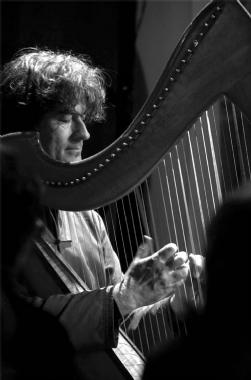