Bois et Charbon play Gypsy Swing - the colourful style made made famous in France during the 1930s and 40s by Django Reinhardt and Stephane Grappelli.

Brennan has been playing music since he was seven, originally learning Saxophone and Guitar, he has been strongly influenced by the music of Django Reinhardt and the Clarinettist Hubert Rostaing.  In 2017, Brennan completed his Bachelor of Music at Monash University, where he studied Saxophone under the guidance of Carlo Barbaro.

An accomplished Gypsy Swing guitarist, Paul co-formed Bois et Charbon in 2007. He completed a Bachelor of Music at Melbourne Polytechnic where he learnt guitar from Doug DeVries.

Ash is a regular performer on Melbourne’s Gypsy Swing stages along side Peter Baylor (Ultrafox).  He has studied Gypsy Swing guitar from the maestros Fapy Lafertin and Paulus Schafer in France.

The band’s co-founder Jon Delaney is one of the foremost Gypsy Swing guitarists in Australia.  He is also a fine Double Bassist, a role he performs with aplomb for Bois et Charbon.  A VCA Masters Graduate,  Jon has also studied Gypsy Swing from the masters in France.

A typical Bos et Charbon set list will include (but is not limited to) the following songs:

Bois et Charbon loves to perform at functions of all kinds. Here is what some of their satisfied clients have had to say:

Thank you so much! Bois at Charbon was perfect and the positive feedback has been resounding on your marvelous sounds. I sincerely hope all those who have asked me where to find you guys leads to further bookings for further congenial, laid-back occasions. Looking forward to next time!

I loved the fabulous swinging music and fun vibes that Bois et Charbon brought to my birthday party. The music brightened the party and was loved by everyone. Thank you so much for playing!

I just wanted to thank you most sincerely for your performance last Sunday for Nance's 90th Birthday. I think it was one of your best. It made such a spectacular difference to the afternoon, and very many people commented to me on how good you were. Also your rendition of "Some Enchanted Evening" was spectacular. You transformed it into something the originators could only have dreamed of.

Bois et Charbon created the perfect atmosphere for our garden fair, laid back and festive. Their blend of mellow jazz reached a wide audience and encouraged our visitors to relax and enjoy both the music and the day.

You can catch Bois et Charbon performing at Lentil as Anything restaurant in Abbotsford on Saturday mornings. 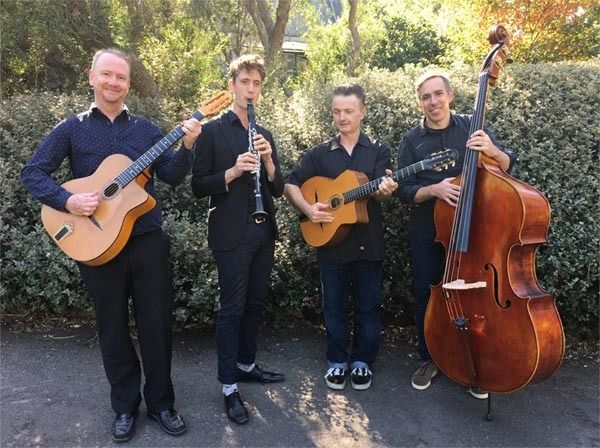