THE Fusion Mafiosi delivers the most memorable Jazz and Fusion Music. delivering a selection of Bebop & Fusion Classics

received his first drum kit in 1998 and was taught some stick control by his father Malcolm. James studied with Chris McCaig for 3 years, and then pursued lessons with Milan Troha at the Billy Hyde Academy in Sydney. James Began his professional career at age 14 playing the club and pub circuit.

Over the years James has played with hundreds of musicians all over Australia Live, on TV and in the studio ranging all styles of music and genres. Many of these artists have toured both nationally and internationally and have released successful albums. James was the winner of the nationally recognized 2003 Annual Billy Hyde's Open Drummers Playoff in Sydney at 19 yrs of age. James has had his own sections in a popular U.S drummer’s magazine and Internet site.

was born in Buenos Aires, Argentina. Since his early childhood Marcos developed a big commitment towards the arts and music. Marcos started studying bass guitar at the age of 14 with German Jeselsohn, until the age of 19 when he was accepted at SADEM Music Institute.

Marcos has worked with both original and covers bands playing venues, festivals and corporate events across South America and Australia. In Sydney Marcos has been working with various artists including, Danny John Trio, Monannlisa Wilde, The Full House, Lucy Bourke, Frank Macias, Revolution Incorporated and many more. 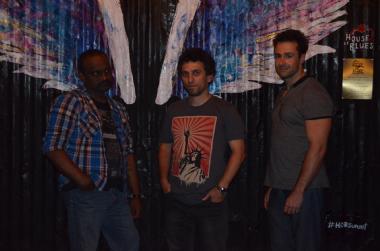